In yesterday’s issue, I talked about the two biggest trends in the investment world – the shrinking dollar and the scarcity of energy.

If you’ve heard the “good” news that America is becoming more oil independent, you might think that all is well.

The thinking being that more oil is good, and the falling dollar is bad – but taken together, it’s a wash.

But it’s not a wash. The falling dollar and the oil boom in the U.S. are two different trends, and one cannot reverse the effects of the other.

If you don’t have an ownership stake in this oil trend, then you will not prosper from it!

So listen, if you’re not interested in investing in American oil or the trends around this oil story – today’s letter is not for you.

But there is an amazing thing happening in the American oil markets – something that lots of “experts” said would never happen.

So how do you get your ownership stake?

I’ve talked with fellow commodity analyst Tyler Laundon about what he looks for in an oil stock.

Tyler has outlined several key stages of small oil company development. I’m going to focus on “early-stage” oil companies because that’s where you can find the biggest profit potential.

You can see these stages in this chart: 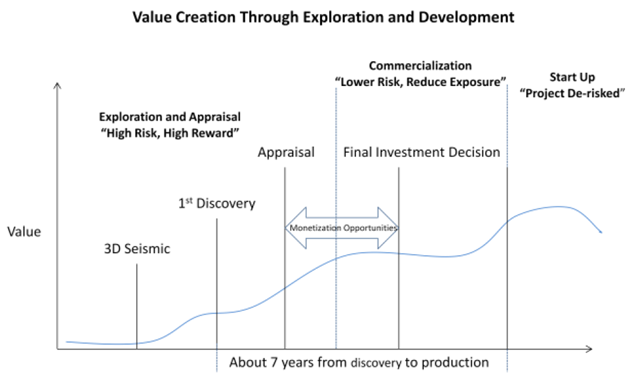 This chart doesn’t include any kind of profit parameters, but it gives you a general idea of the key catalysts that you need to be aware of.

Tyler recommends hedging your oil position by buying a variety of companies in different stages of development.

The companies that are further along the continuum are obviously safer. At some point they become de-risked, which doesn’t necessarily mean that ALL of the profit potential is gone – it just means that there are no more unknown catalysts that can boost (or crush) the company’s prospects.

The companies in the stage before their first discovery are incredibly risky. There are ways to do your homework and minimize that risk, but until they strike oil, you’re treading on risky ground.

A mix of companies that are in different stages of development gives you a diversification of risk and reward. Not all companies will find oil in the pre-discovery stage. Not all de-risked companies will never find more oil.

But owning oil companies along the continuum gives you a good mix of risk and reward. And more importantly, the odds are heavily in your favor that your later-stage companies will pan out – and will sustain your ownership stake in America’s oil renaissance.

If you’re interested in hearing more about Tyler’s views on early-stage oil companies, I recommend taking a look at his commodity research service – called Pay Dirt. It focuses entirely on commodity investments, and specializes in going into detail about that “diversification within the sector” kind of research that gives you upside potential with a balance of safety.