About a month ago I published an article on a rare asset class that outperforms. Soon after completing that article, which my wife read and (spoiler alert!) which featured wine investments, I found myself in the liquor store.

I just couldn't help it, and apparently I wasn't the only one. As soon as I entered the house with my purchase my wife ran to get two wine glasses. We drank the bottle in record time.

Clearly, I thought, I was on to something here. The subject of wine was intoxicating.

So it was with intense interest that I read about Crimson Wine Group's (OTC: CWGL) spin-off from conglomerate Leucadia National (NYSE:LUK) in March. One interesting detail of this spin-off was that it apparently had less to do with CWGL being better off as a stand-alone company than with management (LUK recently merged with investment bank Jefferies) at LUK not wanting the "underperforming" asset.

Perhaps ironically, the performance of the two stocks hasn't been much different since the spin-off was completed. In fact, if you want to split hairs CWGL has marginally outperformed LUK.

I haven't yet completed much due diligence on CWGL so I can't speak to the merits of buying this stock just yet. But what I can speak to is the clear growth in wine's popularity, and why people almost get giddy when they get their hands on a nice bottle.

This popularity is why I think it's worth taking a closer look at pure-play wine stocks.

All of the data point toward a rapid rise in wine's popularity. National Public Radio (NPR) completed an interesting study concluding just this, the punch line being that wine now accounts for nearly 40% of liquor store sales, up from just 16% back in the early 1980s. Most of that market share has come at the expense of liquor.

If you think back over the years you'll likely come to the same conclusion, and perhaps you'll also notice just how trendy wine has become. Especially in the 20 to 40 year old group of Millennials and Generation Xers, a market where beer and alcohol used to rule.

Both the Nielsen Company and the Wine Market Council have published bullish figures supporting this case (pun intended). Based on 2012 market data, the wine market is growing because of increasing consumption at the younger age of the spectrum.

Certainly the Baby Boomers still make up the loyal base of consumers, but a younger demographic that drinks more glasses, and more frequently, is helping to drive consistent growth. 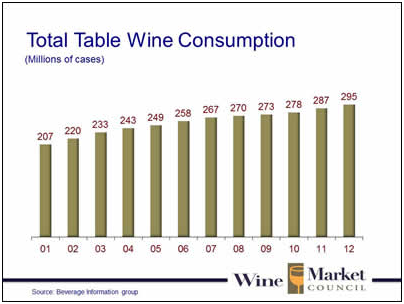 Wine isn't just the drink of choice for the wealthy either. The vast majority of consumption is driven by those making $100,000 or less. 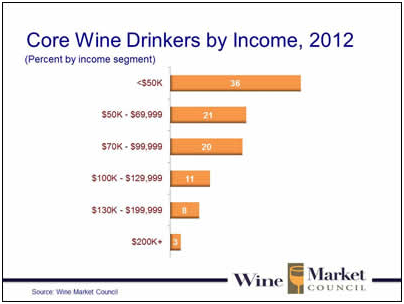 None of this means that all wine producers are growing at rapid rates, or that establishing a successful vineyard is easy. Far from it; it's still a very competitive and difficult market, especially at the affordable (also known as "popular") end of the market. But that hasn't stopped the number of wineries exploding by more than 80% in the last 12 years.

The wine market is one of the fastest growing markets in the agricultural industry, averaging 10% to 15% annual growth. And talk about scarcity – good grape vines are among the rarest plants out there; hence the multi-thousand dollar sticker price for the most exclusive wines.

One notable trend within the trend is the rise of Chilean, New Zealand and Australian wines. Wines from all three countries have gained more shelf space where my family shops, and in particular offerings from Chile and New Zealand are gaining shelf space in my mother's kitchen.

I don't know that the “mom” indicator is foolproof, but it's certainly another data point suggesting that wine stocks are worth a taste test.

As I stated earlier, I haven't yet completed enough research to know if Crimson Wine Group (CWGL) is a buy. At first glance, it appears overvalued to me.

But I recently recommended a well researched pure-play wine stock that has a long and profitable operating history, pays a dividend and is enjoying rapid growth as a result of export demand for its critically acclaimed wines.

You can learn more about this company here.