And I’m more or less comfortable with being wrong – over the short term.

Commodities almost without exception are down – but unless I was foolish enough to throw all of my money into commodities 12 months ago, only to sell today, it shouldn’t much matter.

What matters more: that prices are down today, last week, last month, and over the past year – or whether they’re likely to go up in the next 1-10 years?

I think you know the answer. Nothing has changed for the story of the commodity bull market.

But before I get into the details of that story, and just to spell out how painful it’s been to be a commodity investor, take a look at the chart below… 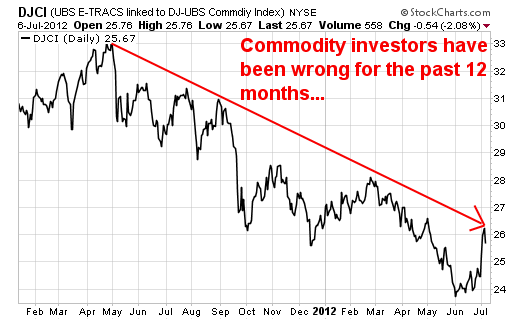 Okay, so it looks bad.

And it looks especially bad considering that by any sane measure, commodities should be higher…

Though we haven’t seen HUGE amounts of money printing lately, there’s been plenty of easy money policy from both the Fed and the European Central Bank.

Under “normal” circumstances, we might expect things like Operation Twist Part 2, or any of the ridiculous bailouts and debt creation from the euro-zone as highly inflationary and great for commodity prices.

But like a drug-resistant bacteria, it seems like these days “normal” dosages of stimulus have little effect on this market.

I’m not the only analyst saying easy money policy should be pulling commodities higher.

David Zervos of international investment bank Jefferies feels the same way. He says, “Shouldn’t all this accommodative policy by the Fed, ECB, SNB, BoE and BOJ be sending commodities to the moon?”

“We cannot mix a lot of debt with a lot of deflation—that will be the end of us!”

So what’s the next step?

Like Mr. Zervos, I believe weakening commodity prices will send a signal to the world’s central bankers. That signal: “You’re not stimulating enough!”

For the record, I think it’s a mistake for central bankers to print money. But it’s a mistake I’m prepared to profit from – by holding on to and/or adding to my commodity positions.

I hope you don’t see the last 12 months of commodity weakness as a reason to abandon ship.

And at the risk of sounding like a broken record, I think we’ll be handsomely rewarded for staying the course. Our central banker counterparts only have one play in the playbook – and that’s to print money. Eventually that money will find its way along to chase commodity prices higher.