Consumers racked up more debt in November than at any point since the 2008-09 recession.

Apparently a lot of consumers broke out the plastic during their Black Friday shopping. Visa (NYSE: V) and Mastercard (NYSE: MA) shareholders are surely thankful that they did.

Visa shares are up 16% since the beginning of November. Mastercard shares have risen 14%.

And while the last two-plus months have been especially fruitful for the two largest credit-card companies in the world, the two stocks have been ascending rapidly for the better part of two years.

Check out this two-year chart of both stocks: 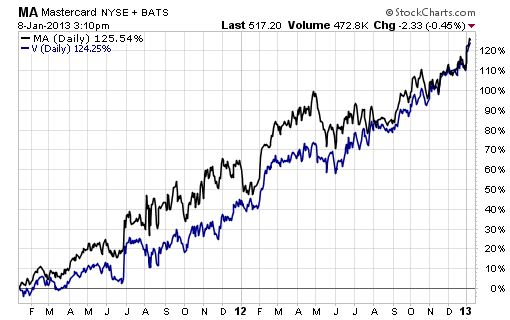 The moves have been almost identical – right around 125%. At the end of 2010, consumer credit spending was on the decline, having fallen off 1.2% that year. Since then, credit spending has risen every quarter – and Visa and Mastercard have taken advantage.

Visa’s revenue has increased each of the last two years. Mastercard’s quarterly profits have increased 40-fold since the end of 2011.

With credit expanding so rapidly, most analysts are still high on both stocks. In fact, analyst opinion on the two stocks is identical: 27 “buys”, six “holds” and just one “sell”.

So even after such an incredible two-year run, shares of Visa and Mastercard appear to have plenty of room left to grow.