The “sell in May” phenomenon is in full effect. 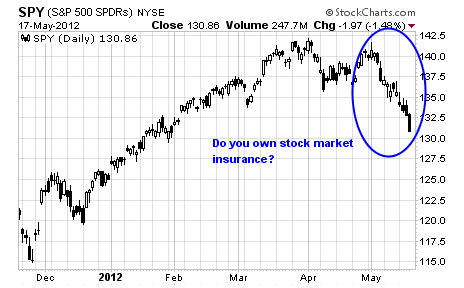 Is your portfolio prepared for further declines?

If not, don’t panic. It’s never too late to learn. Whether you choose short, intermediate, or long-term strategies (hopefully a combination of all three) always remember, investing is ultimately a long-term endeavor to create wealth……which is exactly why I am constantly trying to teach people how to use options for both income and as a hedging strategy. 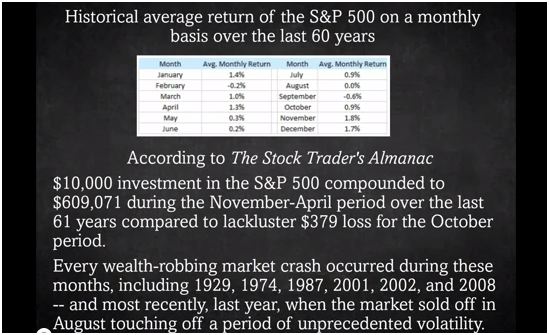 Again, we all know the market doesn’t advance in a straight line. Bull runs come in spurts. And the spurts are typified by a steady advance. Bear runs come in spurts as well. However, unlike bull runs, bear runs typically come hard and fast. But the most notable of often forgotten stat regarding market action…. 75% of the time it moves sideways.

And what are we doing during these stagnant times? We are all losing out on opportunity costs.

This is when leverage makes the most sense. Not being greedy and trying to hit the home run, but to use a small amount of money to implement sound strategies that effectively combat slightly higher, sideways or declining markets.

It was late April and the old Wall Street adage “sell in May” period was nearing. The market had pushed steadily higher for roughly 3 ½ months before losing stream in April. The market was overbought and the market felt top heavy. So it was the perfect time to teach people how to use credit spreads to enhance their overall portfolio returns.

Expecting a sideways, lower or even a slightly bullish market ahead I wanted to look back to what sectors led the recent charge higher. Of course, with Apple’s rapid advance and 18% share the Nasdaq 100 ETF (NYSE: QQQ) was the obvious choice.

At the time of the trade QQQ was trading for slightly more than $66 and was overbought state over the intermediate-term. Typically, this means that the probability of a months- long pullback was high.

If we take another look at the QQQ chart above we can easily see what has happened since the May began…..QQQ has tumbled.

As a result, the QQQ trade I mentioned in the webinar made over 18% thereby effectively hedging some losses of the typical stock-only portfolio. Moreover, the last several SPY trades for the Options Advantage portfolio have made roughly 15%. With the summer doldrums nearing I expect to see much of the same. In fact, the summer months (as proven by the “sell in May” phenomenon) are seasonally the best time to enact income producing strategies while hedging downside risk.

As always, if you have any questions, please do not hesitate to email me at [email protected].