The market had some trouble yesterday. Problems from Europe flowed into the U.S. indices, which applied a downward force on prices. Every sector was hit and volume rose during the decline.

While our losses were nothing compared to the ones outside the U.S. the selling pressure was strong – although it evidently wasn't strong enough. SPX managed to hold support at 1355 again and the indices rallied slightly after a huge morning open to the downside.

Overseas investors have calmed down today. Much of Asia posted gains and all of Europe rebounded from yesterday's 3% collapse. But today and tomorrow will be big days in the U.S. Despite Apple (Nasdaq: AAPL) earnings and durable goods it might be the FOMC that could shift the market and bring the bulls back.

Curiously, the FOMC may inadvertently make the market more bullish. And it would be a quirk of statistics that would make the rally possible.

Mean, median and mode. Those are three very common statistical words and they could have huge implications on the market.

Mean is the sum of the values divided by the number of values. Median is the numerical value separating the higher half of a sample from the lower half. Mode is the most common value among a group.

Put another way: mean is the average, median the middle number, mode is the most frequent value.

Given a set of data, each method has its own merit. And it's really up to the analyst to decide which method or combination is best for their analysis.

There is often no right answer. And that is what makes the analysis of Fed interest rate expectations so difficult ahead of Wednesday's announcement.

We all know that the Fed is going to hold rates, but we don't know the timeline. Ben Bernanke has sworn to keep rates at zero through 2013. But the FOMC could decide to keep them at low levels for longer. In fact, there is a wide discrepancy about how long it will take for interest rates to rise. But the consensus is 2014, whether you use mean, median or mode. 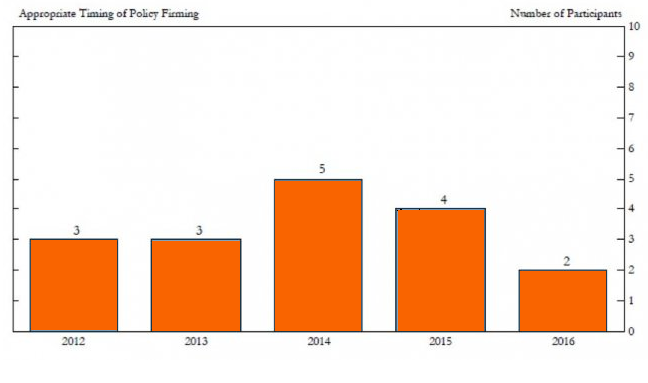 Here's where it gets interesting. Lately, the FOMC members have been bullish. Despite a slow-growth first quarter, the economy did improve and has shown little sign of weakening.

With that in mind, it's likely that the FOMC members who were slightly bearish become a bit more bullish. So those two FOMC members expecting hikes to start in 2016 may slide their opinion up by one year.

A move from 2016 to 2015 is a slight sign of optimism, but it could have big implications for the market because the consensus would then switch to 2015 from 2014. Sounds crazy, but here's how. 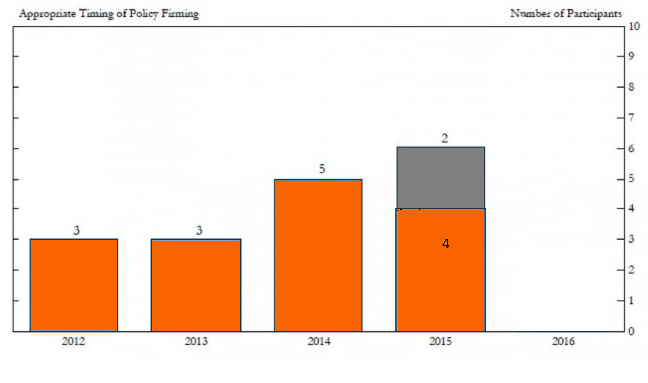 A move by two FOMC members to 2015 doesn't materially alter the median or the mean. But now the mode moves to 2015 from 2014, which is a huge difference given how much this stock market likes free money.

Aside from the FOMC meeting on Wednesday, Apple (Nasdaq: AAPL) earnings come out tonight.

Then durable goods orders come out in the morning before the open. Expect a wild ride for most of the day Wednesday.

It would be a bright sign if SPX can manage to take back 1374 today. Although with pessimism widespread in Europe and not too much to cheer about back home, only a leaked story is going to be enough to take back 1374 resistance.