Yesterday, stocks recovered a little from last week’s sharp sell-off. A little time over the weekend to reflect on the true potential of the "Volcker Rule" (the name given to the new banking regulations proposed by the President on Thursday) to become law probably helped.

Stocks gained slightly even though December home sales dropped a worse than expected 16%. That’s a pretty bad surprise, but stocks shook it off. That suggests to me that last week’s sell off may have been a bit exaggerated.

As an aside, I’m not sure why there was concern that Fed Chief Bernanke wouldn’t be re-confirmed to his post. Sure, Geithner might be on the way out, but that’s no big deal. I see zero percent chance that Congress would let Bernanke go at this point.

*****Fourth Quarter earnings have been good so far. I read that 70% of companies reporting have beaten expectations. But many of the surprises have been met with selling, like IBM (NYSE:IBM) and Google (Nasdaq:GOOG).

Apple (Nasdaq:AAPL) just reported a blow-out quarter, putting up $3.67 in per share earnings when analysts were only looking for $2.09. Apparently, an accounting change allowing Apple to book iPhone sales differently helped. But still, Apple stock was barely moving higher this morning on some exceptionally good numbers. I asked TradeMaster Daily Stock Alerts’ Jason Cimpl of his take:

Accounting change or not, Apple had a great quarter. In the past, not only would the reporting stock be up significantly after solid earnings, but market futures would be up as well. Not today. Apple shares are up slightly, but stock futures indicate a lower start to the day. This decline follows rate increases from China and economic worries out of Japan. Asian indices were heavily sold last night as China lead the way with a 3.5% decline on the Shanghai followed by Hong Kong with a 2.7% drop.

The market is paying attention to news again.

Despite negative commentary at times, stocks found every reason to stay bullish in 2009, but news is starting to actually matter once again. The market is responding favorably to positive news and selling on negative news. Thus far, fourth quarter earnings have been only average, but guidance for this year has varied across the board.  Investors are starting to care more about the future than the present and have bought and sold stock based on management guidance instead of simply evaluating current figures. For traders, this means that you will have to move away from being primarily market technicians, and start to review financials in greater detail before you trade a company.

*****Earnings to look forward to this week:

So the Venezuelan central bank has sold $179 million in U.S. dollars to buy and support the bolivar. The problem is, according to Bloomberg, there’s no amount of money that can support the bolivar because it’s being sold by Venezuelans who are getting their money out of the country, away from Chavez.

On January 8, Chavez devalued the Bolivar in a move aimed at helping the Venezuelan economy. Instead, he sparked inflation which could hit 45%. And that’s still not the only thing plaguing Venezuela. Since he started kicking out Western oil companies and nationalizing oil fields, Venezuelan oil production is down 30%. 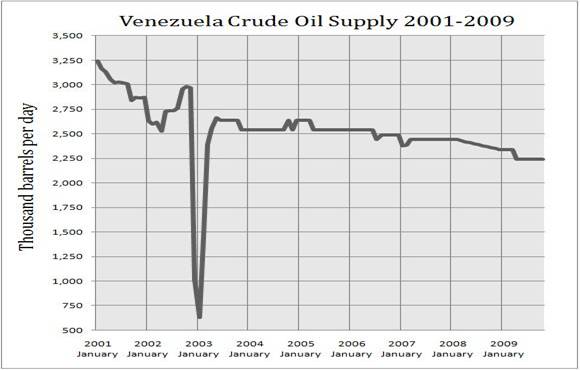 And Bloomberg reports that:

Venezuela‘s power shortage may push oil above $100 a barrel if President Hugo Chavez diverts electricity from the biggest refining complex in the Americas, Curium Capital Advisors LLC said. Chavez may tap a power plant at the 940,000 barrel-a-day Paraguana complex to supply electricity for public use, said Colin Fenton, chief executive officer of the Boston-based oil research firm. "He has to decide every single day what to do with Paraguana," Fenton said today in an interview with Bloomberg TV in New York. A shutdown there would cause a temporary price spike until U.S. refiners make up for the lost output, he said. Most regions of Venezuela are facing blackouts for two to four hours a day to save power as the worst drought in 50 years reduces water levels in hydroelectric dams that provide 73 percent of the country’s energy.