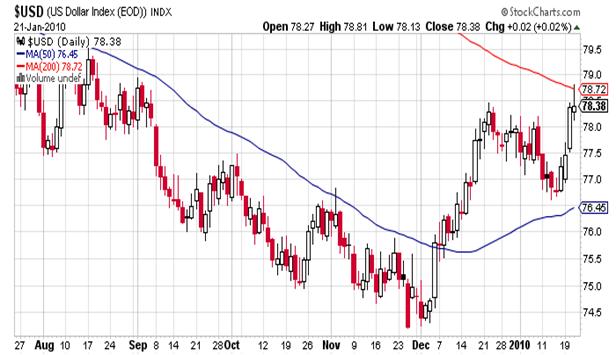 Well, the short dollar trade hasn’t worked out, has it? Of course, Daily Profit readers were advised that a dollar rally was imminent in October and November (It should be noted that today’s action looks like a textbook reversal for the greenback. Could that mean there’s some upside for stocks coming?).

Markets move in mysterious ways sometimes, and it’s best to get in tune with what’s really moving stocks and avoid imposing seemingly logical beliefs on the markets, like more debt equals a weak dollar.

*****Yesterday’s speech by President Obama clearly rattled the stock market, so I’m going to wade into politics (hopefully briefly). If you didn’t hear the speech, you should give it a listen. His proposals make more sense if you hear the speech directly. Click HERE to follow the link to the New York Times article that has a video of the speech.

One thing is clear. Obama is abandoning Treasury Secretary Geithner’s "slap on the wrist" approach to dealing with banks and adopting the more hard-hitting approach championed by former Fed chief Paul Volcker.

As you know, I have been critical of Geithner from the beginning of his tenure. The way he’s dealt with the financial crisis, it would seem he’s eager to be the next Treasury Secretary-turned-bank CEO. But now, he may have a tough time even keeping his current job.

*****You’re going to hear plenty from the banking lobby that Obama’s plan to re-define banks will squelch innovation, curb growth, and kill the economic recovery. And while it’s true that banks won’t make as much money if they suddenly can’t do just anything they want, it’s also true that banks don’t have to be "banks."

Let’s not forget that Goldman Sachs and Merrill Lynch chose to become bank holding companies in September of 2008 so they could access the Fed’s emergency lending facilities and enjoy FDIC protection, too. That’s because when allowed to just do anything they wanted, they failed miserably.

*****I’m not sure how this will all play out. It is unlikely Obama will get everything he asked for in yesterday’s speech. But I hope he’ll focus on these regulations and such and abandon the idea of taxing banks and limiting compensation.

Now, let’s open up the discussion. Write me. Tell me what you think about Obama’s new bank regulation proposal. My address is: [email protected]

When stocks are rallying, bad news gets ignored. But when the stock market is ready to sell-off, investors will use any news – even good news – as a catalyst. Like I said, markets move in mysterious ways.

To cut through some of what’s going on in the market check out this technical analysis of the market’s recent sell-off from TradeMaster Daily Stock Alert’s Jason Cimpl. You can watch his video by clicking HERE

******My most recent video investment conference is ready for your on-demand viewing pleasure. You can watch China Inc.: Understanding China for Outstanding Profits by clicking HERE.