Take a look at this six-year consumer confidence chart:

It’s about how you would expect it to look, right? The pinnacle came in mid-2007, before the financial crisis hit. The nadir came in February 2009, at the height – or, rather, depths – of the recession.

Since then consumer confidence has slowly been restored, building to a four-year crescendo this month with a 73.7 rating – triple the ghastly 25.3 rating of early ’09.

Now look at this chart of the S&P 500 over the same six-year time period: 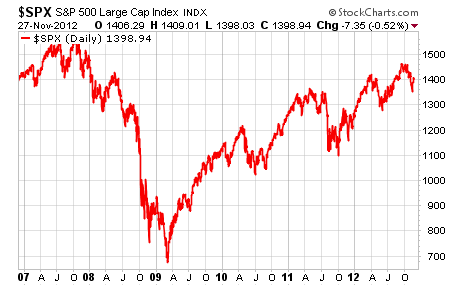 Looks pretty similar, doesn’t it? Before a recent pullback, stocks were trading at their highest level since early 2008 – the last time the consumer confidence index was this high.

But is it overconfidence? Is this the kind of overconfidence we saw at the turn of century before the dot-com bubble burst or five years ago before the subprime mortgage crisis plunged America into a recession from which it’s still recovering?

The parallels from  February 2009 are a bit eerie. Consumer confidence was at roughly the same level. But in both instances, we were hanging by a very thin financial thread. Last time it was on the edge of a lending crisis. This time we’re a month away from a potential “fiscal cliff” that many are saying could lead to another recession.

Record sales on Black Friday and Cyber Monday reflect the rising consumer confidence. Clearly, all those hundreds of millions of shoppers weren’t too concerned about the fiscal cliff. But is the average American aware of its potential ramifications – or that it even exists?

Look, confidence in our economy is a good thing. Perception is often reality, and if people feel the coast is clear enough to spend money at a record clip, then that’s good for the economy.

Confidence may be soaring now – at least compared to three or four years ago. But that confidence stands on a razor’s edge. A gust of wind – or, say, partisan bickering standing in the way of a fiscal compromise – could send us all tumbling over the cliff.