Apple (NASDAQ: AAPL) was enjoying a pretty good month through last Friday, with the stock gaining almost 8% through the first 23 days of the month before pulling back a little on Monday. Looking closer at the daily and weekly charts for Apple stock makes me think that there is more movement to the downside coming.

Let’s look at the daily chart first. The first thing that jumped out was how Friday’s high and close were very near to the low in July that could now act as resistance. The other items on the daily chart that caught my attention was that both the 10-day RSI and the daily slow stochastics were both in overbought territory until the pullback yesterday.

The slow stochastic readings just made a bearish crossover as a result of the selling, but more importantly was how this is the third time in the last eight months that both indicators hit overbought territory.

In the first two instances, Apple stock dropped just over 8%  from top to bottom in April. Then, during the drop in July and August, the stock dropped over 30% from the high to the low. 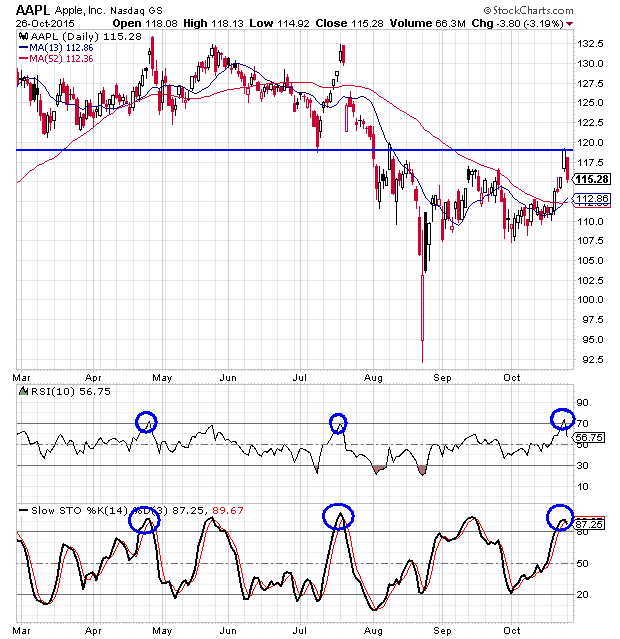 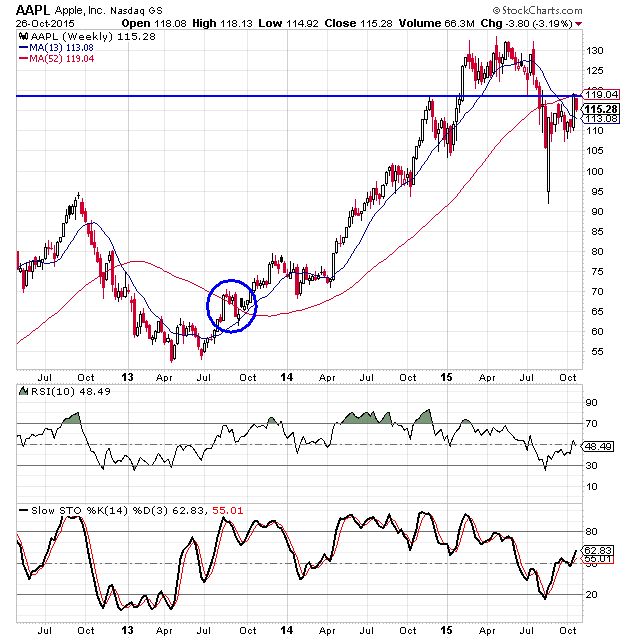 Apple will report earnings after the close on Tuesday, with analysts expecting the company to earn $1.88 per share on revenue of $51.11 billion. The company has beat its earnings estimate each of the last four times it has reported, but investors haven’t been all that enthused. In fact, the peak in July came ahead of the last earnings report. It’s looking eerily similar to the situation where the stock gapped higher one day, erased the gain the next day and then gapped lower on earnings.

The sentiment toward Apple stock is fairly optimistic heading into the earnings report, with a short interest ratio of 1.52. Thirty-eight analysts have the stock rated as a “buy,” 11 have it rated as a “hold” and one has it rated as a “sell.”