It was one of the most interesting conference calls I've listened to in months.

On Tuesday of this week McEwen Mining (NYSE: MUX) – which is headed by the same Rob McEwen who's responsible for building Goldcorp (NYSE: GG) into a global mining powerhouse – held a call to discuss the impact of Argentina's move to repatriate all future oil, gas and mining-related export earnings to Argentina.

Mr. McEwen's company has significant interests in Argentina, most notably the cash flow-positive San José mine and the Los Azules copper project. So Argentina's decree could have a huge impact, to say the least. But while I could talk at length about the potential opportunities and risks facing McEwen Mining, that's not what I want to discuss.

Rather, one caller threw out a bomb, saying:

The caller went on say that he didn't know if this derivative product did exist, but asked if McEwen's management could look into how much naked short-selling is going on and if Goldman is using loopholes to execute this strategy. He also stated that he's heard that hedge funds have testified that "…when they were looking to find hard to borrow stocks, Goldman could easily accommodate them…"

Now, I have zero evidence that supports this caller's assertions that Goldman might be shorting exploration stocks. And he didn't present any either – just questions. But I believe he is in part referring to what are now public records surrounding Goldman Sachs' possible naked short-selling in Overstock.com (Nasdaq: OSTK) stock. That story was published in Rolling Stone last week.

In the context of what's been going on in with the exploration companies, especially relative to the price of gold, this is an absolutely fascinating rumor. And if there is any truth to it then maybe it's possible to get on the other side of it.

Admittedly I'm throwing on my conspiracy theorist hat here, but stick with me.

Last week I wrote about How to Play the Gold Rout, in which I put up the following chart showing the historical extremes between the Philadelphia Gold and Silver Index (XAU) and the price of gold, writing:

"The following chart divides the XAU into the price of gold over the last 20 years to show how many units of XAU can be purchased with an ounce of gold. The trailing 20-year average is between 4 and 5, but right now we are closer to 11. This ratio hasn't been at such extremes since late 2008". 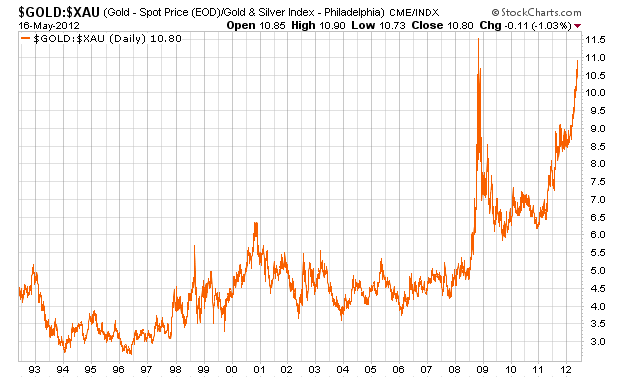 The implications here were pretty clear – the price of gold is extremely high relative to the price of XAU. The XAU is an index of the biggest and most stable miners, such as Goldcorp (NYSE: GG) and Barrick Gold (NYSE: ABX). But if we calculate a similar ratio using the TSX Venture Index ($CDNX) instead (the TSX Venture is the best proxy for the junior exploration sector where the stocks the caller was referring to trade), we see the same pattern. Actually this ratio recently surpassed its historical highs. 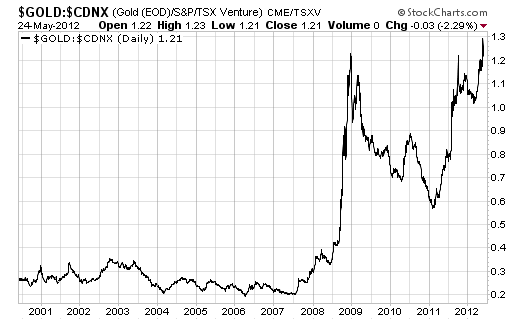 Now, in order to build out this conspiracy case I'd like to see that after this conference call there was a bit of a reversal in the exploration stocks. My reasoning here was that hedge funds would want to cover some of their positions if they knew that word could get out. No reason to overdo an up-until-now successful trade.

Again, using the TSX Venture Index as a proxy, I pulled the following 5-day candlestick chart on 30-minute intervals. The conference call I mentioned ended around 11:00 am on May 22.

While my proxy for the exploration sector did start to move higher on the 23rd (after word of the call got out?), I'd have to say that in the grand scheme of daily market fluctuations this is anything but conclusive that big short positions in exploration stocks are being unwound.

That said, the jury is still out as far as I'm concerned. I don't believe the caller's theory is too far flung given Goldman's history, and in reality Goldman (if it was executing this strategy) would probably create a much smaller basket of stocks than the entire TSX Venture exchange index. Offhand I'd guess a number between 30 and 100 stocks. We'd have to fashion a guess at this index then plot its price action – a project beyond the scope of this article.

Junior exploration stocks certainly have their fundamental issues right now. Just take McEwen Mining as one example, which has around an 8% short interest (including all three classes of shares currently trading; MUX, MUX.TO and MAQ.TO).

But the disconnect between the entire exploration groups' stock valuations and the price of gold doesn't exactly add up.

Are things as bad for these guys as they were back in 2008-2009? I don't think so, but the ratios above imply that they are.

Some can say my buying into this theory (even just a little) of Goldman selling long gold-short exploration stock derivatives (along with some naked short-selling) is simply paranoia. I'm fine with that, in reality I'm just looking for the market inefficiencies that always exist out there – especially in the small and micro-cap arena.

"Investing in a market where people believe in efficiency is like playing bridge with someone who has been told it doesn't do any good to look at the cards." – Warren Buffet

Right now, I'm just trying to get a peak at the cards. I can't see them all yet, but that doesn't mean I won't keep trying.

In the meantime, if you do buy any junior miners, stick with those with production growth and cash flows – the "…5 or 10 percent…" the gentleman on the McEwen Mining call spoke of. I think there are some examples from this group that are great buys right now for a patient investor.

When the market forces that are currently at work finally turn this ship around, those are the ones you'll want to be in.

Note: If you want to listen for yourself, you can link to the McEwen Mining call here. The part I discussed above is in the last couple of minutes.