Wells Fargo (NYSE: WFC) will step into the earnings confessional Wednesday morning and they will do so with some bearish sentiment from investors and the stock sitting just above critical support.

Looking at the chart we see that the stock has gone through a recent pullback along with the rest of the market. However, Wells Fargo is sitting at a price point that has been critical over the last nine months. The $52 to $52.50 range has acted as resistance on several occasions during this time frame. Many times previous, resistance will act as support on a pullback.

We see in June and July that the stock made two attempts to break above $52.50, but it was turned back both times. The stock did break through resistance in September, but then the market went through that rough patch in the fall and the stock dropped back below the resistance.

Even in early October we see the stock try to climb back above $52, but it got turned back again. The stock finally broke solidly above resistance in November, but now the recent pullback has the stock sitting right in the hot zone again. 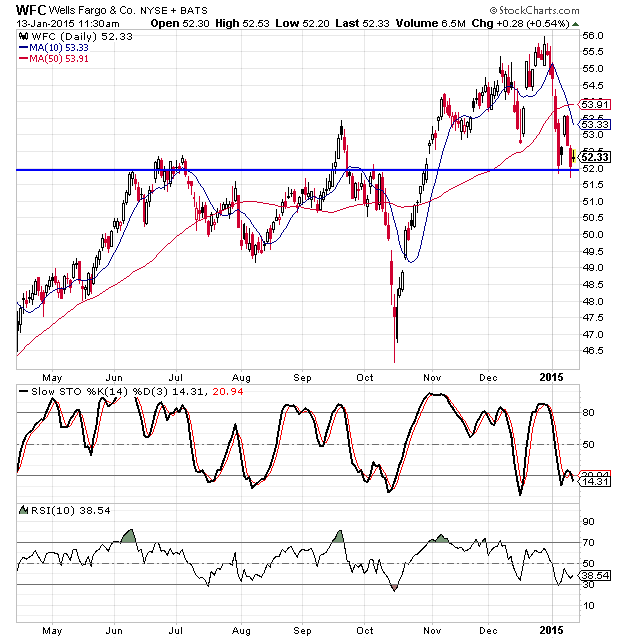 One other item of note from the chart is that the Slow Stochastic readings, an indicator that measure buy and sell signals, are in oversold territory at this time.

Turning our attention to the sentiment toward Wells Fargo, the three sentiment indicators in question are the short interest ratio, the put/call ratio and the analyst ratings. For Wells Fargo, two of the three are showing bearish sentiment.

The put/call ratio for Wells is currently 1.73. That number by itself doesn’t really mean anything until you look at the readings from the past year. In this case, that is the highest put/call ratio Wells has had all year. This tells you that option traders have been adding bearish bets heading into the earnings report.

Finally, there are 28 analysts with a rating on Wells Fargo and only 11 of those analysts rate the stock as a “buy” while 16 have it rated as a “hold” and one has it rated as a “sell”. These aren’t the worst overall readings I have seen, but they are far from the best. To give you an idea of how well thought of one financial stock is, J.P. Morgan (NYSE: JPM) has 29 analysts following the stock and 24 rate it a “buy” while the other five rate it as a “hold”.

If I were looking to add a blue-chip financial stock to my portfolio, Wells Fargo would be at the top of my list.