I think it's fair to say that Warren Buffett is today's version of E.F. Hutton: That is, when Buffett talks, everyone listens. 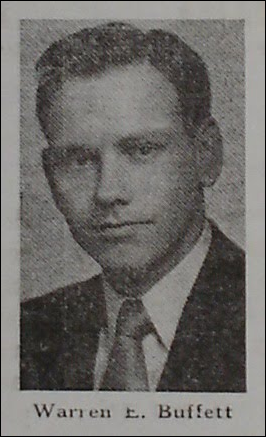 Berkshire's technology investments, in turn, got everyone talking, and rightfully so because Buffett has historically eschewed technology.  I suppose you can chalk up Buffett's change of heart to simple progression.

But is Buffett's progression something other investors should emulate?

Back in the days of silk shirts and pet rocks, Berkshire held a remarkably concentrated portfolio – often owning only six to 12 publicly traded stocks.  Many of these investments were stocks that were deep value plays trading at depressed prices – stocks like Woolworth, Kaiser Industries, General Foods.

This value-style of investing was highly profitable for Berkshire shareholders. The 1975-to-1980 period was exceptionally glorious, with Berkshire's stock price soaring higher by 50-percent a year.

The Berkshire of 30 years ago is long gone, but Leucadia National (NYSE: LUK) reminds me of that great value-centric Berkshire in its glory days.

Like Berkshire, Leucadia is more of an investment fund than an operating company.  The company owns a core portfolio of private companies in manufacturing, land based contract oil and gas drilling, gaming entertainment, mining, real estate, medical product development, and wine making.

Leucadia also owns a 50-percent equity interest in a joint venture with Berkshire Hathaway that operates under the portmanteau Berkadia Commercial Mortgage LLC.

Jefferies is by far the largest holding.  Leucadia owns 56.5 million Jefferies shares with a cost basis that exceeds a billion dollars.

Jefferies is the typical Ben Graham value investment.  It's been roughed up in recent months on its European sovereign debt exposure, but it's still profitable and is trading at just 7 times 2011 earnings while also providing a 3-percent yield.

Because of its exposure to Jefferies, Leucadia's shares have taken a hit, falling 17 percent over the past month.

The drop in share price has made Leucadia itself a Ben Graham value.  The stock trades below book value and trades at 11.5 times next year's estimated earnings per share of $2.00 a share.  Unlike Berkshire, though, Leucadia pays a dividend (albeit at $0.25 a year).

Leucadia is best undertaken as an investment, not a trade.  As an investment, it has performed spectacularly over the years, particularly when compared to Berkshire as the company's size has grown.

Leucadia Outperforms Berkshire Through the Years 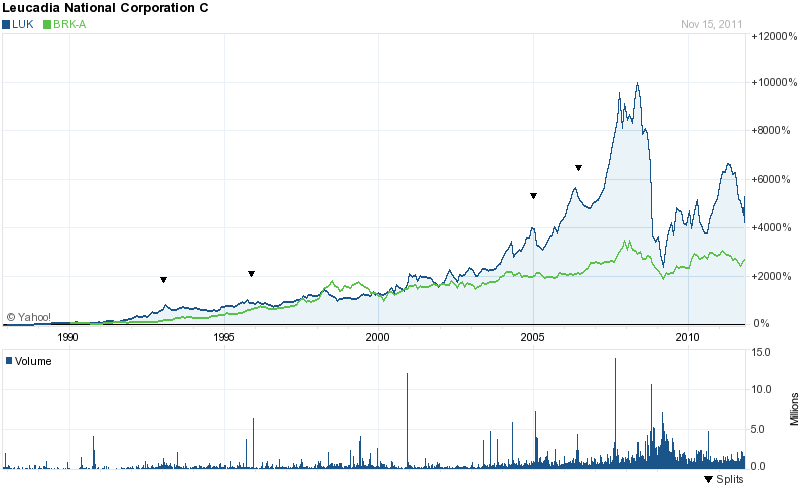 The chart above is revealing.  Over the past 20 years, Leucadia has produced twice the return to shareholders than Berkshire.  Leucadia's performance is attributable to the handiwork of two men: Chairman Ian Cummings and President Joseph Steinberg.

The Warren Buffett of Leucadia National

I don't think I'm being hyperbolic when I say that Messrs. Cummings and Steinberg investment brilliance approaches that of Charlie Munger and Warren Buffett. (I suggest reading Cumming's annual letters to shareholders at Leucadia's web site – they're as informative as Buffett's.)

Since Cummings and Steinberg took the reigns in 1979, Luecadia's long-term return to shareholders has been nothing short of amazing.  They have compounded book value by almost 20 percent annually over the past 31 years, which is in line with Berkshire's book-value compounding.

More important, at least to me as an investor, is share appreciation.  Here again, Cummings and Steinberg don't disappoint.  Since 1979, their management and investing acumen have helped propel Leucadia's share price to $23.50 from a split-adjusted $0.10 in 1979.  That's a 19-percent average annual rate of appreciation.

Leucadia is one of those stocks to buy and hold for years, but here's a minor caveat: Leucadia has a history of uneven earnings due to frequent changes in the number and types of businesses it operates, as well as changes in the value of its investments. For this reason, investors should expect some price volatility (evinced in Leucadia's 1.78 beta). But for the long-term investor, this volatility is simply a cost of owning a company that has outperformed over the long term.