Yesterday we learned that new single-family home prices in the U.S.
have hit a five-year high.

But despite rising prices, many prospective home buyers are still
anxious to close a deal while interest rates are at record lows, as this
chart of mortgage rates since the 1970s shows. 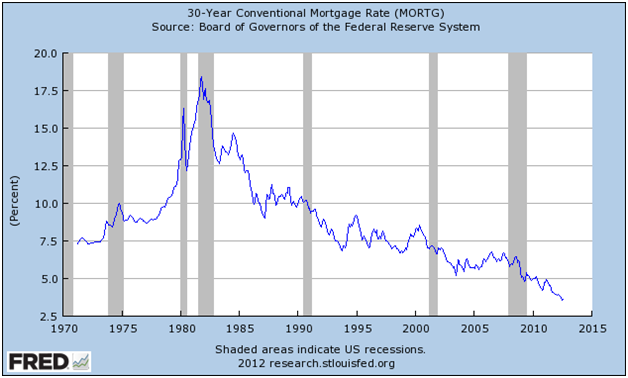 Yet interestingly enough, home prices are rising fast enough to
push overall housing affordability down from the highs posted earlier in
the year.

The most recent reading from the National Association of
Homebuyer’s Housing Affordability Index was at the end of the second
quarter of 2012, and came in at 185.1. That’s down from 205.2 at the end
of the first quarter, and also below the level of 197 posted at the end
of 2011.

In order to bring this index back to record levels, prices or
interest rates need to drop.

Interest rates pose a more interesting discussion in the wake of
QE3. After all, one would think that the Fed’s plan to purchase $40
million of mortgage-backed securities each month would help push rates
lower – maybe even below 3%.

Yes, that’s a bargain compared to 4.1% a year ago and 5.0% two
years ago. But the mortgage industry can do better. It just doesn’t
appear to want to.

An interesting piece in The New York Times last week
suggested that the spread banks make on mortgages right now are wider
than a year ago, despite the lower interest rates.

This spread is essentially the difference between the interest rate
on a mortgage and the rate the bank earns when it sells that same loan,
which is packaged into government guaranteed mortgage-backed
bonds.

But right now? This spread appears to be more than 1.4%. That means
a 30-year fixed mortgage could theoretically be locked in at around 2.8%
and the industry would enjoy the same profit it made in the four or so
years after the housing bust.

If that were the case, housing affordability would likely push back
above the record high that it reached at the end of the second quarter,
even if home prices continued to rise moderately.

But while any consumer would love a 30-year fixed mortgage below
3.0%, I don’t recommend holding your breath.

It’s far better for homebuyers to buy the right home and strike
that perfect balance between principal and interest payments each month.
That means saving for a nice downpayment to begin with, and buying a
house that is well within their means.

The lower the principal, the lower the interest payment and the
lower the overall cost of home ownership over the long-term. And that
means more equity is built up in the actual property over time. If
property values continue to climb – even slower than the double digit
rate over the last year – then buyers have still made a great investment
while also enjoying the utility of the home.

So while most of us would love to lock in the 3.0% 30-year fixed
mortgage that the industry appears to be able to afford, my advice is
find a house that you can make nice fat principal payments toward each
month.