Today you can buy a 10-year Treasury bond and get a 3.11%
yield – but wouldn’t you rather own shares in a company that pays a better
yield, and has the potential to increase in share price?

This company pays a
3.4% dividend – and better yet it has the ability to raise or lower prices at
will. That’s because it takes one of the cheapest commodities on the planet
(corn) and turns it into an easily consumable good – with a price markup in
the triple digits. Whether you believe we’re headed into deflation or
inflation, pricing control is hugely important.

More on this pricing control in a minute…

Most people buy Treasuries precisely because they want
safety.

If you’re worried about safety, I’d make the argument that
buying shares of Coca-Cola (NYSE: KO) today is at least as
safe as buying a 10 year Treasury. Whereas Coca-Cola has less than $12
billion in debt (about 1/3 of its total annual revenues) the U.S. Treasury
has to fund something close to $13 trillion in the next 10 years, – which
amounts to close to 80% of its revenues over that period – but that doesn’t
account for continued deficit spending…

You might make the argument that the U.S. Treasury can
always have the Federal Reserve print more cash to meet its debt obligations,
but Coke can do the same thing by issuing new shares. Both scenarios assume
there are willing buyers of course.

Besidesthe massive
debt obligations, Coke has something else that the Treasury can’t boast:
Coke’s revenues are growing. According to
The Wall Street Journal today:

“Aggressive marketing during the World Cup gave Coca-Cola
Co.’s namesake soda a boost in the second quarter, driving sales in markets
from the U.S. to Brazil and pushing profit up 16%.”

Meanwhile, U.S. tax revenues fell precipitously last year,
and they haven’t quite recovered…but that hasn’t stopped Federal spending.
The estimated deficit for 2010 is over $1.5 billion: 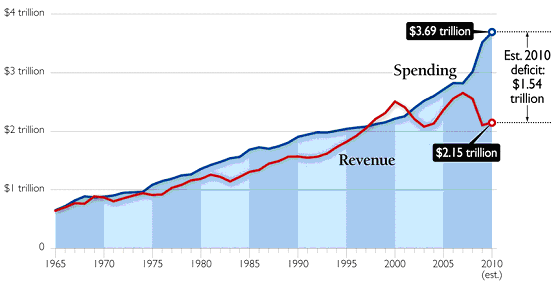 So how is Coca-Cola able to control its pricing? As I said,
their business model is based on taking corn, one of the cheapest and most
readily available commodities on the planet, and turning it into an easily
consumable product with a triple digit markup.

But those 26 cents let the firm manufacture approximately 10
bottles of Coca-Cola. So each bottle of Coca-Cola has less than 3 cents worth
of sweetener – but you’ll pay at least $1.25 for a 16 ounce bottle.

The other inputs to the product (carbon dioxide, water, food
coloring) are at least as cheap. The plastic bottle, at approximately 85
cents a pound might be the most expensive part of the manufacturing
process.

Of course, Coca-Cola also has to pay for distribution – but
it’s still somewhat vertically integrated. You might recall that Coke split
off the bottling portion of its business into a separate corporation called
Coca-Cola Bottling (NYSE: COKE). The bottling wing is still
31% owned by the manufacturing wing.

So, this company is still basically intact as the closest
thing to a legal-monopoly. I fully expect corn prices to rise, but it won’t
matter for Coke because they have the ability to raise prices at will. Corn
syrup and other sugar prices could quadruple, and it might wipe out smaller
players in the soda sector, but Coke won’t be going anywhere.

Heck, the company puts plain water in a bottle (it owns
Dasani), and people buy cases of the stuff.

Coke’s one of those
companies that’s going to be around no matter what happens in the broad
market. Like I wrote in my article on Budweiser (NYSE: BUD)
you couldn’t design a better company from scratch. Coke has worldwide brand
recognition, fierce customer loyalty, great marketing, pricing power, and
even a history of raising its dividend.

I mean, look at this chart showing the company’s dividend
growth going back to 1962:

I love this company under $55, because you’re locking in the
dividend at more than a 3% yield; which is better than a 10 year Treasury.
There’s been strong support at the $50 level, but if you get a chance to buy
this company at that price, I’d back up the truck.

The bottom line: corn is going to go up in price, and that
will only help Coca-Cola.