Gold and I are close – but I have no illusions about its
usefulness or role in my portfolio. It’s a store of value and a medium of
exchange – though admittedly more the former than the latter at
present.


Its ability to preserve wealth is unparalleled while the broad market remains
bearish. I’ll never sell all of my gold or silver, because as my
younger sister Beth says, they’re very effective paperweights.

She meant the
remark as a slight against my ‘foolish’ choice to buy physical gold and
silver – but I agree with her in one respect: gold and silver do an excellent
job of paperweighting your last bottom dollar no matter how windy the markets
get…

That being said, I am peeking over the horizon for a time
when I will gladly sell most of my gold and silver to load up on an
investment that’s historically been the greatest generator of wealth and
profits in world history: the broad stock market. More specifically, I want
to buy the 30 companies in the Dow Jones Industrial Average index.

But I don’t want to
buy today, with a trailing average PE of 14.34. I’m more interested in buying
the Dow near all time lows – like when it sold for between 6.88 and 7.59 in
1980-1982. Of course valuations can be tricky, so I’ll use the relative value
of gold during that time as a more effective goalpost.

That time period coincided with record inflation adjusted
highs for gold – and for a moment in January of 1980, the Dow and gold traded
very close to nominal parity. In the third week of January, gold briefly sold
for $850 an ounce, and the Dow index was at about 870: 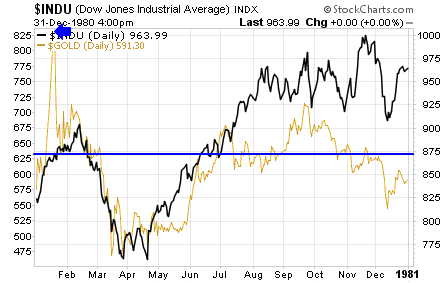 Today, there’s a variety of analysts and prognosticators
predicting just about every possible dollar value for gold and index number
for the Dow.

One of the most respected (and accurate) is Charles Nenner.
Mr. Nenner looks at huge macro trends in the broad stock market. He
accurately predicted the 14,300 point high for the Dow back in 2006. Then in
December of 2007 he predicted the market would crash.

Today, Mr. Nenner is looking for the Dow to dip close to
5,000 sometime in the next few years.

Will this be
another chance for gold to come close to parity with the Dow? Maybe, but it
would mean that gold will be selling for close to $5,000 an ounce.

And if so, I’ll look at this crossing of these stars as a
time to ditch gold and silver and move into the Dow. The last time it
happened (in 1980), every dollar invested in the Dow was returned 12-fold
over the following two decades. That presents another problem; when to sell
the Dow. But I’ll cross that bridge when I get to it.

In the meantime, I’m still buying gold and silver. Right now
I’m starting to put together a comprehensive report on exactly how to buy AND
sell precious metals. My report should be done in the next month or so – but
if you have any specific questions or comments on the process, please send
them my way at [email protected].