I hope you followed my advice last week.

That's a good way to make sure you get a lower price. It doesn't always work, but it's better than chasing an investment higher.

I had a reader write in to ask about platinum with regard to its better known precious metal brethren: gold and silver.

"I really enjoyed your piece about Platinum the other day, especially since all I ever hear about from the talking heads when it comes to precious metals is gold and silver. Out of gold, silver and platinum do you see the most upside in platinum? How do the three metals compare in terms of percentage used for industrial purposes?"

As you may know, I actually don't write very often about platinum, mostly because I'm not very well-versed in the subject. I've done a relatively small amount of research and found that – as with silver – much of the world's mined platinum gets consumed by industry. 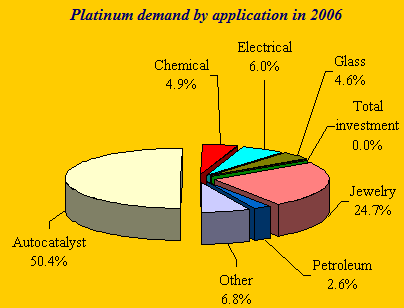 About half is used in the manufacturer of catalytic converters – which turn most of the noxious emissions from cars into nitrogen, vapor and carbon dioxide.

Jewelry accounts for approximately another quarter of all platinum supply – and not surprisingly, very little platinum is consumed for investment purposes.

(I know the above chart is 5 years old, but for the bulk of platinum uses, it hasn't changed much.)

But really, I'm not terribly interested in the industrial uses of platinum.

I'm basically trading platinum until it returns to mean – that is, until it's more expensive than gold.

Considering that my thesis for gold is for it to move gradually higher, I guess I expect platinum to have the most upside from these prices – but it could also languish for a period of months below gold…

The only circumstance where I would probably avoid this current trade would be when I see a (more) substantial break down in the American economy. During that scenario, I would expect physical silver and gold to outperform – because classic precious metals are tacitly understood to outperform not during inflation/deflation or even currency crisis, necessarily – but during periods of high uncertainty and loss of faith in currency.

In that case, my paper PPLT position will be a hill of beans. For that matter, so would any of my paper positions in silver or gold.

That's why I always stress to take delivery of physical.

For that reason, I wouldn't suggest buying physical platinum. Most people have a decent understanding of silver and gold. But platinum basically looks like silver. It's a little heavier than gold. No one really owns any platinum, or has seen it in person or even on TV.

If platinum were a baseball card it might be Carl Yastrzemski. People have heard of him, and he might be a better ball player than Babe Ruth and Mickey Mantle (gold and silver) but if you're talking baseball cards, or precious metals, you want to stick with what other people know.

I'm sticking with physical gold and silver – and for the time being I'm trading platinum.