Tomorrow is the last day of The Resource Prospector. That’s the bad news.

The good news is that the price of nearly everything you buy is about to go up.

Okay, maybe that’s not “good” news – unless you have what Tyler Laundon calls “an ownership stake” in some very specific commodity investments.

Which ones? Well, let’s take a look at a chart before I get into the details.

The chart below plots the price of two every day commodities. Looking at it, you might come to the conclusion that the prices of these two commodities are highly correlated. And you’d be correct. 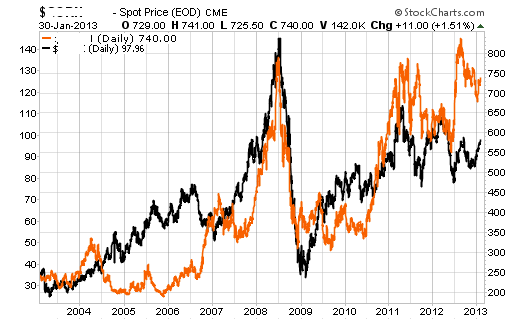 On the off chance that you don’t have commodity charts committed to memory, the chart above plots corn prices in orange, and oil prices in black.

There are times when one outpaces the other, but over the long term, they tend to move together.

Not surprising – considering commodities are priced in dollars. Federal Reserve Notes are literally the common denominator of every commodity on the planet. So you can’t just look at the price movements of these commodities and come to a conclusion about supply or demand.

Dollars are always the third input. And the relative strength or weakness of dollars can make even an otherwise flat supply-demand function look like an EKG readout.

But even more importantly than dollar movements is the reality that corn prices tend to track oil prices (in general) when you remove the dollar from the equation. How do you do that?

Simple: divide the price of corn by the price of oil. That crosses out the dollar from the denominator, and you’re only left with a ratio of corn:oil.

Doing so shows us that even though corn has doubled in price since 2010, it’s still well within the normal ratio with oil:

And since oil is one of the biggest cost inputs in farming corn (tractors, combines, trucks, trains and ships all run on diesel) it’s really what we should be paying attention to.

Oil plays a huge part in the price of nearly every commodity – whether it’s mined or pumped out of the earth or planted and harvested, all commodities have an oil input.

I’ve said it before, but it’s nearly impossible to extricate your own existence from oil – even the energy you spend thinking about oil has an oil input. Stop thinking about it so much: you’re wasting oil!

Now, you might agree with me – but you might also believe that since America is all of a sudden in the midst of an oil production renaissance that putting money in the oil sector might not be such a lucrative idea.

But even if we double our oil output in the next 20 years, it’s also likely that global oil consumption will at least double.

Oil is one of those commodities that’s SO useful that an increase in oil production only means that we’ll use more oil. If the world is an engine that consumes oil, that engine only gets bigger (the demand grows) when we find more oil.

If you disagree, then you should start paying attention to the number of cars our friends in China and India are putting on the roadway every year.

The implication is serious – and can be very profitable.

My colleague Tyler Laundon is telling his readers to load up on certain oil investments. He’s focusing on what he calls “Frontier Oil” – and it makes sense. The biggest undiscovered oil reserves aren’t in places where we’ve already looked. They’re on the world’s last remaining frontiers.

You can read more about Tyler’s research by clicking here now.