You've probably heard about how copper is the only commodity with a PhD in economics.

You can see this correlation pretty clearly in the chart below, where I've plotted copper (in orange) against the S&P 500 index (in black): 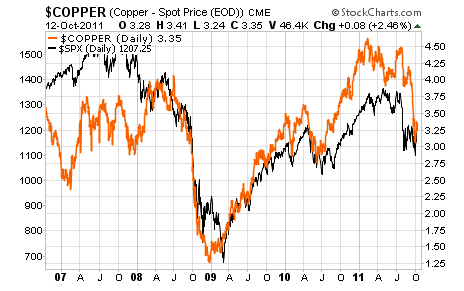 You'll notice that most of the time, copper moves just ahead of the stock market. For instance, copper bottomed at the end of 2008, but the S&P 500 didn't bottom until March.

Likewise, copper topped out in late March of 2010, while the stock market topped in early April.

It's not a perfect correlation, but it's one of the better single data-point indicators for the stock market out there.

But I'm not terribly interested in copper right now. I expect the stock market to trade sideways, sometimes higher, sometimes lower, for the foreseeable future.

While the stock market languishes, I expect commodities to outperform.

And I'm not heavily invested in copper for the very reason that copper prices tend to rise in line with the stock market.

But copper can tell us something about one of the assets I am interested in: silver.

You might not realize it, but most of the silver in the world is mined as a byproduct, or at least, alongside other metals. For whatever geological reason, silver tends to be found alongside copper, zinc, lead, gold and other (mostly) industrial metals.

For example, the largest silver mine in the world is BHP Billiton's (NYSE: BHP) Cannington Mine in Australia. This mine produces about 7% of the world's silver annually. But when you think of BHP, silver doesn't come to mind.

BHP has dozens of income streams, from base metals like copper and zinc, to oil and gas production, coal, potash – basically anything that you can dig out of the ground.

They don't have to mine zinc, copper and lead if prices are low. And the nature of their ore bodies means that they can't just decide to only mine silver, while leaving the zinc, copper, lead, bauxite, etc. behind.

Doing so would be uneconomical. 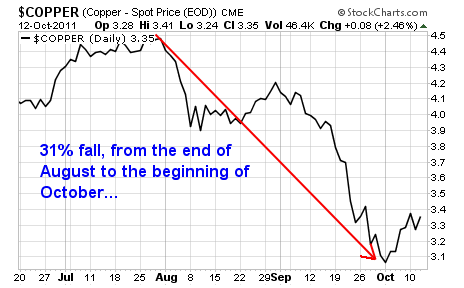 So what do you think these big "catch-all" miners will do with copper prices so low?

Do you think they'll continue to blindly produce more copper at these depressed prices?

Maybe. But I think it's likely these miners will take a breather. Which means we could see a boost in the price of silver.

I should qualify this statement, because copper could certainly fall a lot further than it has so far.

Copper is still another $2 away from the lows of 2008, but I'd look for lower copper prices to be bullish for silver.