We write a lot here at the Resource Prospector about gold and silver and how well those two metals have done in recent years. But another metal we rarely discuss has made quite a move of late: copper.

Copper prices are up more than 4% in the last two weeks, rising to their highest point in more than a month at $3.60 an ounce.

There has been no obvious reason behind copper’s recent rally. According to the Financial Times, copper inventories remain high in China, the largest importer of the metal. But as commodity investors, we are, of course, more concerned with what copper prices will do rather than what they’ve already done.

That’s difficult to predict, since copper is more volatile than gold or silver. And unlike those two metals, copper has not risen steadily over the past decade. In fact, copper prices are no higher today than they were two years ago or even four and a half years ago. 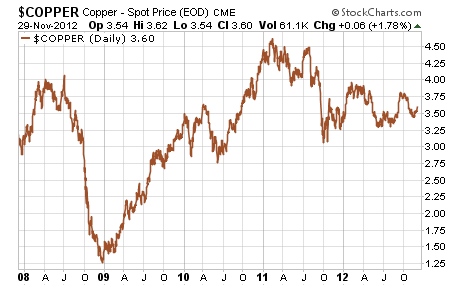 Prices are up – but not nearly to the same degree that gold and silver are. Prices for those metals have more than doubled over the past five years. Copper, meanwhile, has gained a comparatively pedestrian 13%-14%.

The difference is that gold and silver are safe-haven commodities that investors flock to during periods of financial turmoil – as we’ve seen in the last four or five years. Copper’s fate is more tied to the economy. It’s very similar to oil in that way.

Look at the five-year oil chart below, and note how similar it looks to the copper chart above: 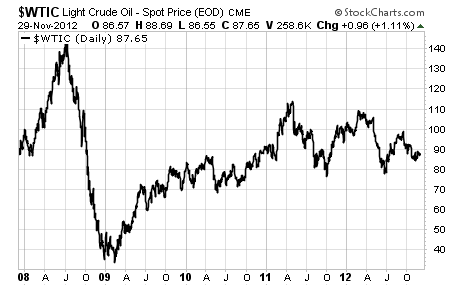 It makes sense. In many ways, the global economy is just as dependent on copper as it is oil.

Copper is a major component used in building construction. Copper wiring is also used to make cars. So when both the housing and auto industries crashed in early 2009, like oil, copper prices tanked.

Now, as we’ve talked about extensively here at Wyatt Research, the housing market is recovering. So is the auto industry. Housing starts in the U.S. hit a four-year high in October. Meanwhile, less than four years after its 2009 bailout, the U.S. auto industry is suddenly boasting record profits.

As new homes are being built and more cars are being made, demand for copper will rise.

It may not be as flashy as silver. It might not be as safe as gold. But copper is a metal worth tracking and potentially buying – at least so long as we don’t all go tumbling over the fiscal cliff.