I’ve said it before, but the debt ceiling is a red herring. The United States will default on its debts for the simple reason that they are too high to get rid of in any other way.

Whether it’s an outright default for bond holders or the more likely default of inflationary policy, we’ll see the US default on its debt, and all of the terrible things the politicians on either side of the aisle threaten us with will come to pass – regardless of what bill is passed or how high the debt ceiling gets raised.

The problem is that we’re talking about an abstraction. The dollar does not exist. It’s an idea. There’s nothing backing it except for some guns and some printing presses.

Even the world’s most powerful military can’t turn paper into money.

And though the world’s most powerful military can cause lots of damage and loss of life in the Middle East, it can’t make oil prices cheaper.

If you really want to see some growth, cheaper oil is about the only sure way to make it happen.

But the reality of the situation is bleak.

The International Energy Agency (IEA) reported this month that they expect oil demand to surpass available supply for the second half of 2011.

That means only one thing: oil prices are headed higher. And without new supply coming on line, they’ll likely stay higher.

Not only will oil prices stay high – certainly above $100 – but you and I will likely be forced to get along with less oil.

That’s because every day, more oil gets diverted to India, China and other developing countries.

I realize it sounds ridiculous to think of China and India effectively taking oil from the United States, but that’s exactly what the data tells us. 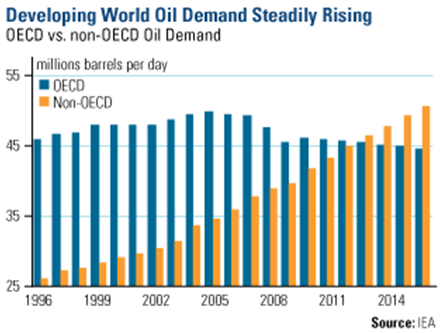 My point isn’t to scare you. In fact, you should be thrilled. This strong trend gives you a clear cut picture of how to invest your capital today.

I know it’s kind of an obvious play, but take a look at shares of Exxon-Mobil (NYSE: XOM).

Exxon has traded relatively flat this year, and they still sell for about 12 times earnings.

They pay a dividend that’s competitive with short term Treasuries at about 2.1% annual yield, they’re cash rich and they have global reach.

If you don’t own Exxon, this might be a good time to pick up some shares. Especially now – as the world is completely distracted by the debt ceiling, we have an opportunity to pick up shares of a world-class oil company for relatively cheap prices.

Don’t wait until triple digit oil gets priced into oil majors like Exxon. The debt ceiling vote will come and go – but oil prices only have one direction to go long term: way up.