Gold has reached its most critical point in seven years. Or at least that’s what the chart tells us.

If you believe in such things as technical indicators, gold prices are currently at a crossroads. At $1,695 an ounce, gold is bumping up against a support line that it has only dropped below once in the last decade.

With the exception of late 2008, in the middle of the worst U.S. recession since the Great Depression, gold has never dipped this support line – and has risen higher than before each time.

Take a look at the chart: 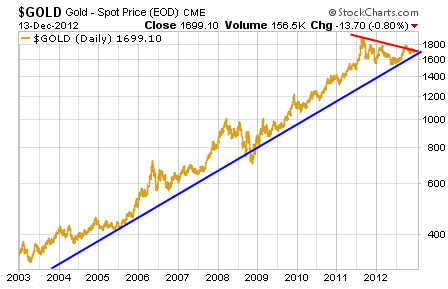 The blue line in the support line. The red line forms what is known as a “flag pattern.”  A flag pattern is technical analyst geek jargon for what happens when the price of a stock or commodity fluctuates within a narrow range, marking a consolidation point before the equity or asset breaks either up or down. On a chart, it looks like a flag with a mast on either side.

So the chart tells us that gold is going to break out of this tight fluctuation pattern one way or the other. If it breaks up, then look for gold prices to resume their 10-year ascension. If it breaks down, then gold will be breaking a support line that has rarely been breached in the past decade. That wouldn’t be good news for long-term gold investors.

Then again, gold did drop below its multi-year support line in late 2008 and managed to bounce back stronger than ever. That year, prices for the yellow metal dropped almost 300 points after briefly touching $1,000 an ounce. Within three months, however, gold shot right back up to $1,000.

Dipping below a long-term area of support would no doubt be a concern. But it wouldn’t necessarily be a death knell for the world’s most reliable commodity.

One look at the above chart tells you all you need to know about where gold is likely to go. As you can see, it’s had its share of short-term pullbacks – most notably in 2008. But on the whole, gold has risen unimpeded for a full decade.

Expect more of the same over the long term. Don’t panic too much if gold does break downward out of its flag pattern in the coming days or weeks.

That said…an upward movement from here would certainly be reassuring.