If you were wise enough to buy stocks during the lows of
2009, you’re probably feeling pretty good about your decision. Even if
you just bought the S&P 500 SPDR (NYSE: SPY), which
precisely tracks the total return of the S&P 500 index, you’re up
over 20% over the past year. That’s huge.

Ask any mutual
fund manager if they can replicate 20% annual gains in their fund and
they might have you forcibly removed from their office. And we’ve all
been told by the folks in the mainstream media that you can expect
between 5% and 9% average gains just by being a diligent long-term buy
and hold investor.

It’s a nice sentiment – but it also assumes that stocks
always go up over a long period of time, and that’s just not a certainty.
Putting all of your eggs into one asset class – even one with a good
track record – is not an advisable move.

I’m going to recycle a chart I’ve shown several times
now – for the simple reason that it details the exact reasons why you
should not throw all of your net worth in one asset class. This
chart is courtesy of Barry Bannister, Strategist for Stifel Nicolaus
& Co. 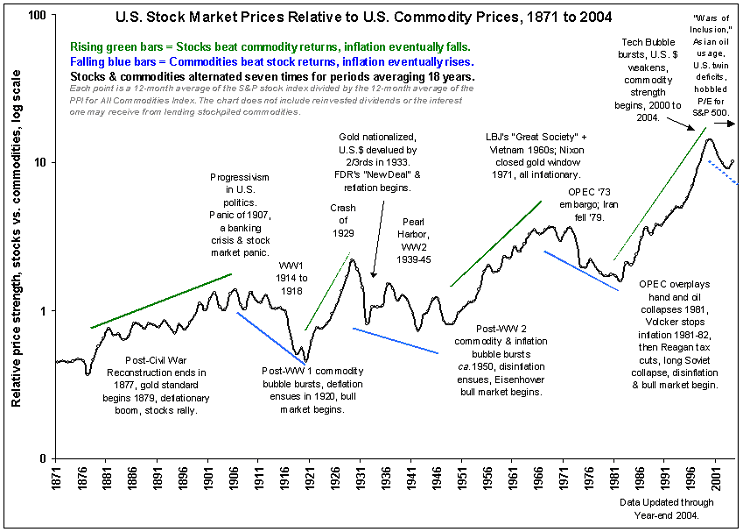 Right now, we’re clearly in the midst of a long-term
secular bear market in stocks. That doesn’t necessarily mean it’s time to
abandon stocks altogether, but it does mean that you should look for
opportunities that are likely to succeed in such an investing climate.
Commodity investments tend to do well during a bear market in
stocks.

Resource investors have done well since 2000, but if
this is an average bull run, we have at least eight years left.

Again, if you’ve been able to take advantage of this
bear rally in stocks for a 20% gain, congratulations – but even during
this rally, you could have done much, much better just buying gold or
gold securities. 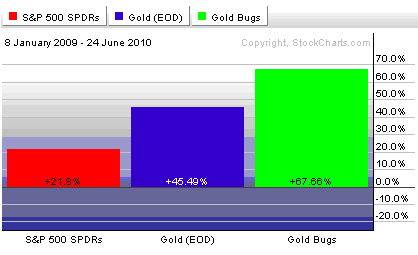 But the past three months are even more telling. While
the market traded mostly sideways, both gold and gold stocks continued
their gains: 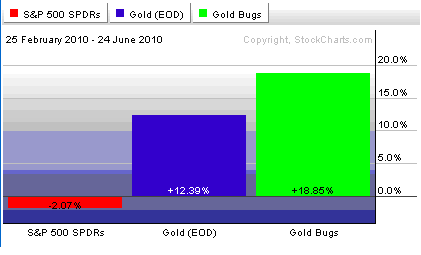 If you’re not invested in gold stocks these days, you’re
missing out not just on the biggest gains – you’re missing out on some of
the only gains in the stock market.

Okay, so I’m not telling the whole story here – let’s
drill down a little further (pardon the pun).There’s one small sector of
the stock market that’s beating out gold stocks. It’s a sector I’ve been
talking about for months now, and I hope that some of you have been able
to take advantage of the opportunity.

I’m talking
about junior and mid-tier gold stocks. These are the riskier companies
that do a lot of the exploration and initial drilling tests for gold
reserves. Most of the time these companies go belly up without ever
finding gold let alone mining a single ounce.

Sometimes these companies find gold, and then simply
hope to get bought out by a larger gold company.

But every now and then, a small mining company literally
strikes gold and has the cash and the ability to actually mine the stuff
and bring it to market.

These companies typically return your investment 10-100
times over – sometimes more.

What this chart shows is that junior gold companies are
still playing catch-up with gold. I’m currently working on a full report
about commodity ETFs, and I will be releasing this ETF’s name, but the
report is not quite ready.

In the mean time, Ian Wyatt has already put together a
full report on his favorite junior gold miner. I like this company
because it has one of the lowest costs to get gold out of the ground of
anyone in the business, big or small. I’ve said it before, but buying
this company at today’s stock price under $4 is like buying the company’s
gold in the ground for $120 an ounce.

But right now there’s an additional upside for this
company. They’re on the verge of getting listed on a new exchange, which
will bring a lot more attention from mutual funds, hedge funds and other
institutional investors. Today is the day that we find out. If you buy
ahead of the announcement, I expect this company to get a one day gain of
at least 10%.

I’ve been working with Ian Wyatt all week on getting a
full write-up on this opportunity completed. You can read the full story
by clicking
here now.