Lithium! As a newsletter editor, I’m bound by law to
type an exclamation point after lithium at least once anytime I talk
about the topic.

That’s because people are rabid about lithium and
lithium stocks – and for very (seemingly) good reasons. With hybrid and
zero emission vehicles in the news every day, it’s hard to imagine that
lithium stocks won’t continue to experience fantastic growth forever and
ever. Just take a look at this gorgeous new lithium powered car that
hybrid car manufacturer Tesla motors is selling for $109,000. 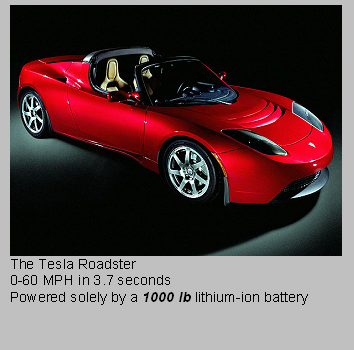 I’ve seen one of these cars driving through Stowe,
Vermont a few times, and when you see one zip by it’s hard to argue
against the idea that lithium is awesome.

Incidentally, Tesla is going public next Tuesday. It
could be a huge sentiment-driven profit opportunity. I haven’t done too
much digging into the fundamentals of Tesla, but if you have any insight
into this company, please send me an email at [email protected].

There’s also big news about the iPhone – a device
powered by lithium batteries.


The Wall Street Journal has had a story above the fold (or where the
fold would be if it were a paper edition) for the past few days about
Asian teenagers waiting in line for the new iPhone.

If you’ve bought a new cordless drill or even a fancy
flashlight lately, you’ve probably seen the flashy new batteries that
accompany them.

All of these
items have the words “lithium ion” plastered all over them.
Lithium isn’t just some magical battery metal; it’s practically a brand
unto itself. And like any good brand, lithium is synonymous with a whole
slew of positive feelings and ideas and newness. Lithium is independence
from foreign oil. It’s green technology. It’s futuristic. It’s smart. If
you take another look at the Tesla Roadster, I think you’ll agree it’s
also good-looking. It’s a quality, high-tech battery material that
somehow holds a charge better and longer than the lousy old
varieties.

They say that oldest advertising hook in the world is:
NEW! And lithium has NEW! in spades.

For many environmentally minded investors, it’s a
win-win situation to buy lithium stocks. You support lithium production
which helps the environment, and you can make money while mother earth
looks gladly upon you.

I’ve done lots
of research on lithium, and as my wife can attest I’m something of an
irritation at cocktail parties whenever the topic comes up. Get a few
drinks in me and I’m apt to rattle off what I believe to be very
interesting facts about lithium. For instance:

Okay – without my wife here I’ll have to restrain
myself. You get the point: lithium is a pretty great battery material.
Until they invent a new highly reactive metal that’s lighter than
lithium, I’m pretty sure it will be the material of choice for batteries
for a long, long time.

So what’s the catch?

Like any commodity story, this one comes down to supply
and demand

The good and bad news is that there are billions of tons
of lithium locked up in our oceans. Until someone finds an economical way
of extracting minerals from the ocean, it will stay there.

The easily extracted lithium is found in only a handful
of places – mostly in the central region of South America in countries
like Argentina, Bolivia and Chile.

Bolivia is believed to have the
best reserves, and unfortunately for foreign investors, Bolivia is a
heavily nationalized country.

The lithium in this region is so easily extracted
because it’s highly concentrated already in a salt form that requires the
least amount of processing. The mining process is to just scoop the stuff
into trucks. They have thousands of square miles of salt flat deserts,
and the lithium is just sitting on the surface.

So if prices spike, Bolivia will simply scoop more of it
into trucks. They can ramp up production cheaply and without any
delay.

If you’re investing in a company that’s NOT in this
region, with harder to mine lithium reserves in an area with worse
mineralization – then you really almost can’t win.

This hearkens back to an issue of the Resource
Prospector
I wrote earlier this week about the importance of location for junior
mining stocks. The issue was about gold stocks, but it’s relevant to any
commodity.

When it comes to small companies, you have to buy the
ones in the best possible locations. I’d rather avoid putting my money
into a company that has to compete with a nationalized operation that’s
able to get the highest-grade lithium out of the ground cheaply and
quickly.

I’ve been doing some research on an undervalued
commodity that should benefit from continued strides made in green
automobile technology – but it will have to wait for another
issue.

p.s. My colleague, Ian Wyatt, the Chief Investment
Strategist and editor of SmallCap Investor Pro,
recently told his readers about a North American gold miner with the
ability to get gold out of the ground for $450 an ounce. It’s located in
arguably the most advantageous place in the world when it comes to gold
miners. That’s a fixed cost that won’t change much – so as long as gold
stays above that price, they’ll continue to reap profits. And if gold
continues going up in price, this company stands to make even better
profits. If you’d like to read more about this low-cost gold producer,
I invite
you to click here now.