No, not
Hank Paulson, the former Treasury Secretary and Goldman Sachs (NYSE: GS) Chief
Executive. Although, you can make a
pretty good case that easy money from Hank Paulson in concert with easy money
policy before him (thanks to Fed Chairman Ben Bernanke and Alan Greenspan) certainly
helped contribute to gold’s intrepid climb…

But I’m
talking about John Paulson; the brilliant hedge fund manager with the huevos to
bet against sub-prime mortgage securities (and make $20 billion in the
process). Wall
Street Journal reporter Greg Zuckerman calls this move “The Greatest
Trade Ever.”

And no
wonder. Paulson took a reasonably sized
$12.5 billion hedge fund and nearly tripled its holdings to $36 billion in less
than 18 months between July 2007 and November 2008. That was a time when everyone else was losing
their shirts as the DOW dropped by nearly 50 percent.

So how
is he responsible for this pullback in gold?

You might
have heard the news on Friday about Goldman Sachs’ recent trouble with the
SEC. The SEC is suing Goldman for
defrauding investors of collateralized debt obligations (CDOs). The fraud comes in because Goldman
(allegedly) did not disclose to CDO investors that Paulson & Co. helped put
together these investments while at the same time betting against them.

That’s kind
of like a car dealership selling you a car that was assembled by a mechanic who
also happens to be betting the drive train will fail.

It seems
that Paulson’s foresight in betting against mortgage backed securities issued
by Goldman Sachs has his fund under scrutiny from the SEC as well.

This scrutiny
is making some people nervous about owning the same gold securities as Paulson
& Co – which is having a downward effect on all gold securities, not least
of which is gold itself.

But even if
Paulson wasn’t embroiled in this lawsuit, his fund still owns 2 million shares
of Goldman Sachs. He bought the shares
back in August, 2009 when they were worth $320 million. Paulson’s Goldman holdings hit a high of $382
million, but the recent news brought them back down to $320 million. That’s not a trade the hedge fund manager can
be pleased with.

*****Will
he sell off his substantial gold holdings to take the sting out of his Goldman
trade? I don’t think so. If Goldman Sachs is in real trouble, it’s
more likely that Paulson would sell Goldman and buy gold.

Will his
fund get liquidated by the SEC if he’s found to be complicit in Goldman’s
crime?

I doubt it
– for the very reason that I just don’t think Paulson & Co. did anything
wrong. The fact that they consulted with
Goldman to package together mortgage securities into CDOs doesn’t make them
liable for Goldman’s deceit.

The
good news – in fact, the great news is that I think this grave situation for
gold prices is nothing but another great buy opportunity for gold
investors.

It’s important
to never believe you can time the market perfectly, but if you believe in a
trend, it’s best to buy in dips.

Take a look
at this chart showing gold prices for the year: 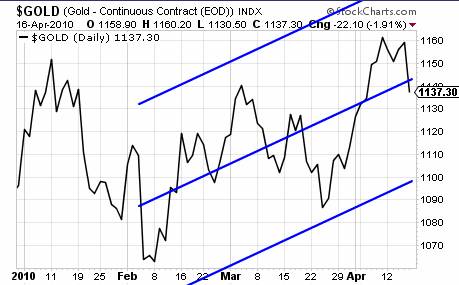 This
channel (by no means set in stone) basically represents the current trend in
gold prices. It shows where the yellow
metal is likely to continue trading if the trend stays in place.

If all this
“bad news” about Paulson and his gold holdings moves the price down, but it
still stays within the channel, prices will likely bounce off of the $1100 mark
in the next two weeks.

If gold
prices break below that mark, it could signal lower lows for the near
term.

In any
event, it’s wise to use this opportunity to add to your position in gold. I’ve said to buy on pull-backs before, but we
really don’t get many great chances like this to buy in substantial dips. I wouldn’t back up the truck under $1100, nor
would I forego buying above that price. The best way to accumulate a position (in any security, really) is to
buy in tranches. They call it “averaging
in” to a position.

To do so, I’d
suggest buying shares of gold companies for their ability to multiply gains in
gold. You can click here
to read about this tendency in a recent issue of the Resource Prospector. It’s
helpful to use the price of physical gold as a benchmark for building positions
in gold stocks. It’s not a perfect
method, but it’s certainly better than building a position with randomly timed
purchases.

If you’re
interested in investing in gold stocks, I recommend taking a trial subscription
in Global
Commodity Investing. Some of our
recent gold recommendations are up 102%…51% and 35% so far. You can see what Global Commodity Investing
is all about by clicking
here.

p.s. Do you have a ticker that you’d like
Trademaster Jason Cimpl to take a look at? I’ve called Jason “the human ticker machine” before – and for good
reason. He’s better than anyone I know
when it comes to fast, reliable and accurate information on publicly traded companies. And for the next two weeks only, he’s asking
non-subscribers to send in their tickers. It’s all part of a special offer for his Trademaster Daily Stock Advisory
– a service that’s recently brought 106% gains in just over a month for his
subscribers. Click
here to find out how to send Jason your ticker.