Last January I put together a brief write-up on my “favorite stock of 2012.”

Not surprisingly, it was a company that’s heavily involved in commodities. The good news is that this company is still super cheap and it’s still my favorite way to invest in the commodity boom – if you have to buy just one company. That’s kind of a ludicrous scenario, but every commodity investor has to start somewhere.

My reasons for owning it today are basically the same that I gave last year, when I wrote:

“It's the biggest copper miner in the world.

“It owns the mining rights to three of the world's largest copper mines – one in Utah, one in Indonesia and one in South America.

“According to the 2011 Forbes 2000 list, Freeport is the also the highest-ranked gold mining company.

“Even better: Freeport currently trades for less than 10 times earnings, and they pay a 2.2% annual yield.

“Even for a big boring mining company, 10 times earnings is cheap. The entire sector is cheap now too – with the average PE ratio just above 10.

“Of course, underscoring my enthusiasm for Freeport is my thesis for higher commodity prices – yes, even copper.”

Fast forward to today, and the story looks about the same. Freeport is a bit more expensive on a trailing earnings basis, but the dividend is better on a yield basis.

The commodity story is even stronger.

Freeport’s main export is copper – and China has resumed its copper demand in a big way. China’s copper imports are at a five-year high. Even if their imports slacken, that puts a huge dent in available inventory. Additional copper will need to be mined, and Freeport (as I noted) is the world’s biggest copper miner.

You might be inclined to point out that if you had bought Freeport last year when I said to, that you’re down a few percentage points. The truth is, Freeport isn’t a trade. It’s a long-term commodity holding that should be a centerpiece of any commodity investor’s portfolio. 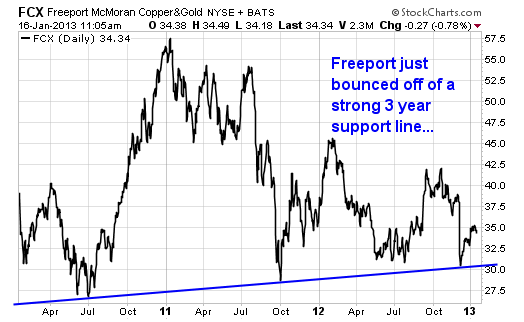 Today, Freeport just resumed an uptrend after bouncing off 52-week lows and a three-year support line.

I can’t think of a better entry point if you’re looking to add to or initiate a position.

Freeport isn’t going anywhere. If the price is even lower next year, I’ll be surprised, but when you get a chance to buy a trophy copper producer off of 52-week lows when it pays a 3.6% dividend, you should be pretty thrilled – even if you’re sitting on a small loss on it.