Something extremely unusual is happening in the platinum markets right now. And I'm about to buy a platinum ETF in my personal investment account.

If you've read this letter for any length of time, you know that I don't usually reveal my personal investments – and that's mostly because they're pretty boring and straightforward. I typically buy physical gold and silver once or twice every quarter.

I also nibble on some deep value stocks like Exxon-Mobil (NYSE: XOM) and Wal-Mart (NYSE: WMT) when I perceive them to be cheap.

With a small amount of capital I also trade some options with my colleague and expert options trader, Andy Crowder.

In addition to my precious metals, I also have a substantial portion of my net worth in cash savings of both US dollars and Canadian dollars.

I've never bought a platinum investment before. I've avoided the bullion because it doesn't fall into my thesis about physical gold and silver. People don't readily recognize platinum as money like they do with gold and silver. So I'm not as interested in holding it for those reasons.

But platinum is rarer than gold. It has more functional industrial uses – most notably in the catalytic converters of automobiles.

And it has investor appeal as well. You can buy platinum bullion through most of the same vendors that sell gold and silver bullion. 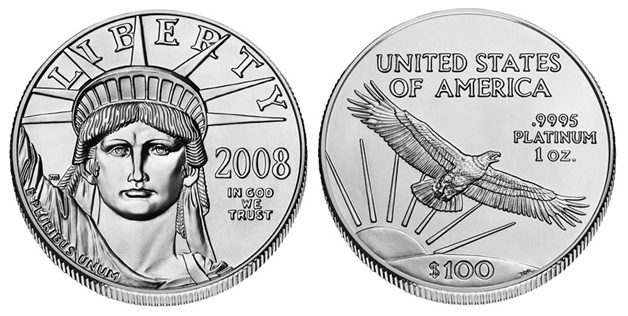 But as I said, something strange is happening with the platinum market.

Usually, platinum prices are higher than gold prices, for the reasons above.

But recently, it's been selling for LESS than gold.

Such an occurrence does not happen very often, and when it does, platinum usually spikes in the months following.

To show how infrequently it happens, I've posted a chart below which shows the price of gold divided by the price of platinum. Anytime this ratio is over 1 it means that platinum was cheaper than gold. 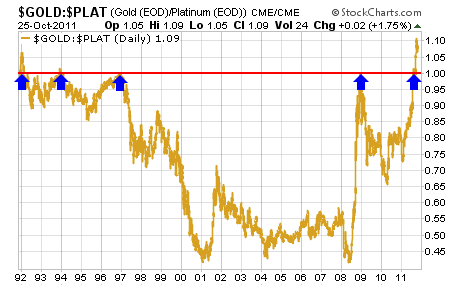 So only five times in the past 20 years has platinum been this cheap related to gold.

And now let's take a look at what happened to the price of platinum after these 4 occasions: 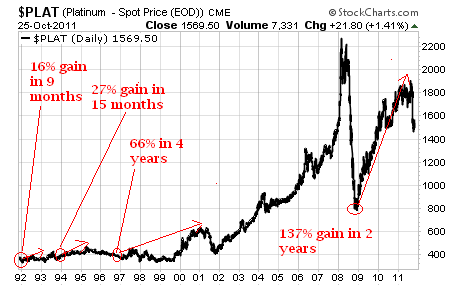 I expect we'll similar gains this time around.

So I'm putting in a bid on the ETFS Physical Platinum Shares Fund (NYSE: PPLT).

I hope to get filled in the next few days. If not, I might have to adjust my bid upwards.

These types of chances don't happen very often. If you're interested in this opportunity, you shouldn't sit on your hands.