Some of the world's best investors are currently pulling their hair out. One trader named Tim Knight recently said that he won't get more invested "until this stupid, idiotic, frustrating, agonizing, moronic, infuriating European Salvation Plan From God is announced." (Also, in this video he notes that German Chancellor Angela Merkel is fat, and French President Nikolas Sarkozy has a big nose.)

When two of the biggest companies in the market miss earnings – and in Apple's case it was the first time in almost a decade it missed – and the market goes higher?

Well, if you're a short term trader or you're trying to pick stocks right now, you're likely to get crushed because we're in a very tricky stage in the markets.

Andy is our options trader, and he currently runs a service about options called Options Advantage. He's told me for weeks now that all of his indicators tell him that the market is extremely overbought. I don't know all of his indicators, but he's been very certain we'll see a big drop any day now.

I'm inclined to agree with him. My long term view is that we'll see stocks move lower before they reach new highs.

But being too early is the same as being wrong – especially when it comes to trading.

The flip side is that I believe commodities will ramp higher as stocks move lower.

Historically, as you may know, stocks and commodities tend to be inversely correlated – meaning that when one falls, the other usually rises, and vice-versa.

And it's probably the most important factor in the markets right now.

Today, it's something related to fundamentals, but also somewhat separate.

I'm talking about the dollar. The Federal Reserve Note.

Call it what you will – but we've seen the dollar's moves have a bigger impact than almost any other fundamental metric out there.

Unemployment is super low. Oil grows scarcer by the day. There's severe market risk bleeding over from Europe and China.

But American stocks are on the rise. Gold, silver, oil and other commodities are somewhat flat.

And it's all because the dollar is now falling. In the short term, this dollar price action has pushed stocks up, and let commodities languish.

So my advice would just be to pay attention to the dollar index. You can do so by heading over to stockcharts.com and typing in $USD into the ticker box. 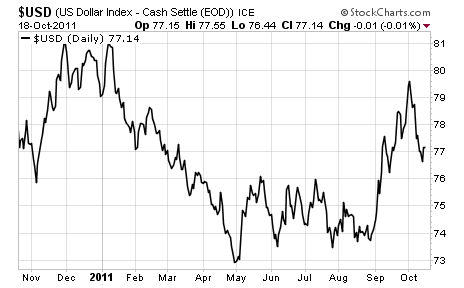 Pull up a one year chart and take a look at the direction of the index. Keep a look out for what the dollar is doing – especially if you're making short term trades.