Yesterday I discussed the overwhelming importance of oil and its
implications for your investments.

My most important advice in yesterday’s issue was buried
down at the bottom, so you might have missed it. Here it is to recap:

“if
I can leave
you with one thing to keep in mind, it’s to remember the importance of oil –
even for non-commodity investments. You need to look at all of your
investments, from stocks even down to bonds and savings accounts, and think
about how oil price fluctuations could affect the bottom line of the
underlying assets and businesses you’re invested in.”

I also promised that I would look into some specific oil
investments to buy under the assumption that the recession has resumed or is
on the horizon.

During a recession, oil prices tend to sag due to decreased
demand for oil, which doesn’t usually bode well for most types of oil
companies.

Sure, a company like Exxon (NYSE: XOM) is
hedged 20 different ways for just about every market climate, so they won’t
get too shellacked during a sustained recession. But I’ve banged the gavel
enough on Exxon, and if you’re not convinced to own it yet, there’s not
really much more I can say. Okay, one more thing: Exxon is
still cheaper than it was during anytime in
2009.

Moving on to slightly different, and just about as green
pastures, I’ve long admired the business structure of oil shipper
companies.

These companies typically negotiate a set rate dependent
upon a variety of factors largely independent of oil prices. So, while they
might have to contend with weather, pirates, port fees, licensing and a
variety of maritime laws, they’re usually compensated on the basis of largely
predetermined factors within those categories. What they don’t have to worry
about as much is the price of their cargo.

Let me give a quick example of what I’m talking
about.

You might remember
last year when Somali pirates were making big news for capturing ships in and
around the Gulf of Aden.

The Gulf of Aden is a choke-point for all shipping traffic
back and forth between the Mediterranean Sea to East Africa, India, many
parts of Asia, and Australia.

Here’s a map that shows the proximity of the shipping lanes
to Somalia: 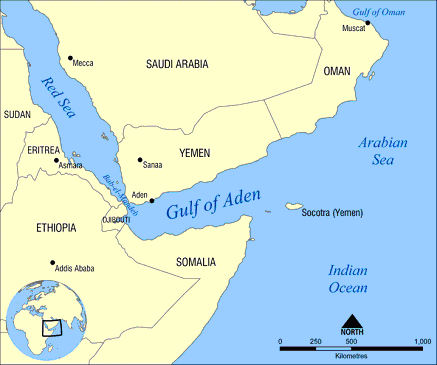 Companies shipping goods through this area were basically
paid a “pirate premium” for the excess risk involved in doing business
through the Gulf of Aden.

That premium has nothing to do with the price of the goods
on board, it’s a straight multiplier determined by shipping
authorities.

One such company Nordic American Tanker (NYSE:
NAT) had some of the newest, fastest, most pirate proof ships in
that area, so even though there was little chance they’d get nabbed, they
still collected the premium.

And shares of NAT did quite well during the height of pirate
paranoia in March-June 2009. 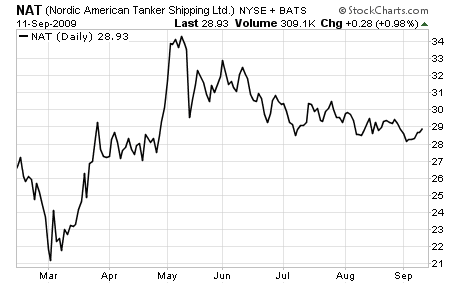 Companies like NAT can benefit, even while the price of oil
is falling or stagnant – because even if we’re in a bad recession, we’re
still going to use plenty of oil.

I like this company as a recession play for two
reasons:

About half of its ships are under pre-negotiated shipping
contracts, so it has a bit of a built in safety-net.

It pays a large dividend, and has done so for the entire
history of its company. Today TNK pays a 10.8% dividend, which is the kind of
income that will make it easier to ignore daily price fluctuations.

If you’ve been looking for a way to invest in oil, and
protect yourself from a recession, then this oil services income play might
be a good place to look.