The most important thing for your investments isn’t gold or
the dollar, or the consumer price index or Treasuries or even the stock
market.

“…in
April of this year, a new daily volume record was set on the Intercontinental
Exchange (ICE) for West Texas Intermediate Crude (WTIC) contracts – with an
astounding mark of 464,381 contracts traded in just that one day. Each
contract trades 1,000 barrels of oil.

With oil prices around $84 that day, each contract was
worth about $84,000. So, it means that over $38 billion worth of oil contracts traded hands in that one day
alone.

Granted, that was the daily record, but the WTIC futures
regularly bypass the $30 billion mark on an average day. To put it in
perspective, $38 billion is more than the annual earnings of Wal-Mart
(NYSE: WMT), the world’s largest
corporation.

Furthermore, WTIC is just one type of crude oil, traded
on just one futures market. There are at least a half-dozen other crude oil
contracts in a handful of different futures exchanges.”

So you ignore crude oil at the peril of your entire
portfolio. While President Obama and Congress bicker over the crumbs of the
economy, and the mainstream media frets over jobs, the recovery,
inflation/deflation, and Wall Street pumps out a new ETF every week –
practically no one is ringing the warning bell about what’s going on with
oil.

Sure, the BP (NYSE: BP) spill was in the
news for months, but no one in the press took the opportunity to bring the
much larger issue of where/when and how this nation will fare in the coming
months and years as regarding our access to oil, or even gave a token nod to
the fact that the price of oil has more than doubled over the past 12
months.

Okay, so not everyone has been asleep at the wheel.

I found this
interesting chart via the Pragmatic
Capitalism website, and it’s originally from the Global Macro Investor
site. 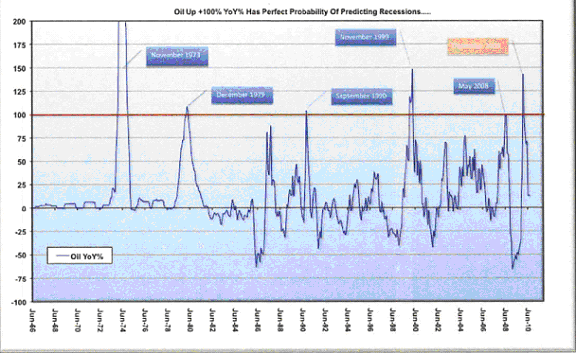 This chart basically shows how a doubling in oil prices has
always (so far) predicted a recession for the following 12 month
period.

Okay, I’m not a technical analyst by any stretch of the
imagination, so I’m really not interested so much in the idea that this
“chart” predicts a recession, so much as I am interested in why it does so
for fundamental reasons.

So far, I’m not exactly sure why this indicator has been so
accurate – but I have a few theories.

I’d also like to hear yours – send them along to [email protected].

Of course a recession by definition is backwards looking.
The standard definition of a recession is when productivity (GDP) falls for
two straight quarters. You can’t really know if productivity has fallen until
after the fact, since the government and other market measuring bodies do not
yet have crystal balls or time machines.

My main theory (which I’ll focus on today)
ties in directly with my opening statement: oil rules. So if the most
important commodity, asset, widget and product for world productivity doubles
in a year-over-year capacity, it probably means that it’s gone too far, too
fast and that the world’s producers are not able to produce as much.

Oil is the main input for almost any productivity equation,
whether we like it or not. So if it doubles in price, it means that
everyone’s productivity result has to diminish by some factor, depending on
how much the price of oil hits the bottom line. Industries that are highly
oil intensive (like shipping) will get hit worse than less energy intensive
industries like, say, telecoms or healthcare.

There are exceptions – and it might be that these
exceptional industries, that are off the teat of oil will be the ones to
thrive during the death throes of peak oil – but right now I’m more
interested in what we can expect on a macro level.

I’ll be going into some specific investment ideas in
tomorrow’s issue – but if I can leave you with one thing to keep in mind,
it’s to remember the importance of oil – even for non-commodity investments.
You need to look at all of your investments, from stocks even down to bonds
and savings accounts, and think about how oil price fluctuations could affect
the bottom line of the underlying assets and businesses you’re invested
in.

disclosure: no positions in BP