With the benefit of hindsight we can check our investing ideas – and thanks to the power of the internet, I can quite easily go back one year in time and examine my investment ideas about silver.

Today, I'm going to take another look at what I had to say exactly a year ago about silver.

I think we'll get some very useful perspective.

Legendary commodity investor and hedge fund manager Jim Rogers recently pointed out that silver prices are 50% below all time highs.

He's talking about the brief momentary highs of nearly $50 an ounce back in 1980.
With silver currently selling for less than $24 an ounce, Mr. Rogers is technically correct.

Silver has already trounced just about every other asset so far this year – it's up 40% since January 1st. 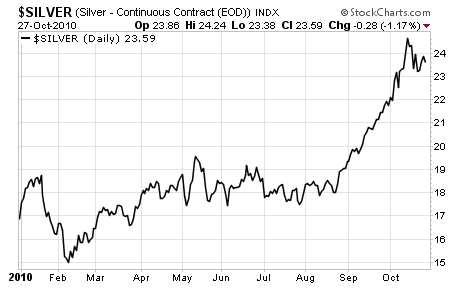 I believe that silver is due for a correction. If you've read any of my articles this week, you've heard me talk about Ben Bernanke and the upcoming Federal Open Market Committee (FOMC) meeting where he will announce the next round of Quantitative Easing.

That would create an excellent buying opportunity for people like me, who are long term bullish on silver.

I'll be bullish on silver as long as the Federal Government keeps interest rates absurdly low, and as long as huge amounts of government debt is the only realistic option to keep paying for all the bells and whistles that politicians promise voters and constituents.

But there's an additional wrinkle in the silver story that I think could give silver an additional, long-term boost…

For years and years, silver prognosticators and analysts have talked about silver price manipulation. In short, the long-running conspiracy theory is that a handful of global banks have placed massive short-side bets in order to manipulate the price of silver.

Well, it's not a conspiracy theory anymore.

According to a recent story in Bloomberg,

"At a hearing in Washington on Oct. 27, CFTC Commissioner Bart Chilton said there have been `fraudulent efforts to persuade and deviously control' silver prices and that violators should be prosecuted."

If you're not familiar with the Commodity Futures Trade Commission, they're the Federal Government body in charge of regulating and monitoring all commodity futures transactions on exchanges in the United States.

They run a pretty tight ship, so it will be surprising if they let any of the offending parties in this manipulation scandal off the hook easily.

So what's the upside for manipulating silver futures contracts?

It's a little complicated, but these banks were placing phantom or "spoof" orders on silver contracts with the intention of skewing prices of options contracts.

The effect, allegedly, is that these spoof orders made some options worthless while boosting the value of other options.

In any event, these "spoof" orders had the supposed consequence of keeping silver prices artificially low.

In light of the announcement from the CFTC that they believe the price has been manipulated, I think we can see an additional boost as short-side orders are either cancelled and/or filled by the offending parties.

When you take a short side bet and you're wrong, when the options contract expires, you have to buy the security at current prices. The additional volume usually spikes the price further to the upside.

Now that the CFTC is on the case, I'll expect silver to continue to make new highs.

It still has quite a bit further to go before it hits inflation adjusted highs – but as I've been saying: wait for Bernanke's announcement next week to add to or build a position in silver.

If you have any theories or insight into the silver manipulation scandal, please send me an email at [email protected].