What's the best time to buy gold on a seasonality basis?

Over the past 40 years (basically since gold became legal for private ownership in the U.S.) November and December accounted for almost HALF of the year's gains for gold.

You can see this seasonality for yourself in this chart: 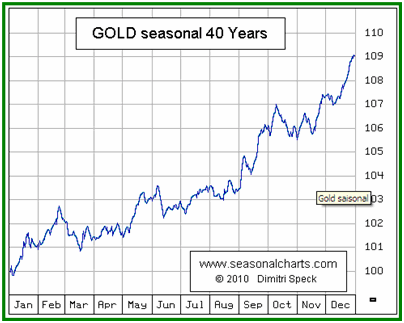 This chart doesn't include data from 2011, but you can see for yourself in this year-to-date chart that 2011 doesn't differ all that much from the seasonal trends: 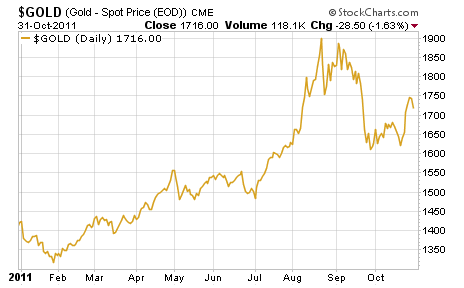 We have the characteristic spike in May, followed by a substantial correction in September-October.

And if this year is anything at all like the previous 40, we'll see about 44% of the year's gains in November and December.

The question is: why are these two months so good for gold?

It has a lot to do with Asian gold buying, specifically, the Indian wedding season, which lasts from the end of September through December. That sustained buying from one of the biggest and fastest growing economies for three months on end tends to have a crescendo effect on gold prices into the New Year.

So this tendency for gold to rise in November and December isn't just some bizarre cherry-picked technical chart: it's a solid fundamental trend of supply and demand functions.

And despite what you might think, higher priced gold has NOT resulted in less consumption in India. In fact, it's resulted in MORE consumption. Over the past 10 years, Indian gold consumption rose an average of 13% per year – even as gold rose faster in price.

So now that we know we have 40 years of a fundamental trend on our side – what should we do?

My suggestion would be to buy gold now.

I also own some 20 Swiss Franc Helvetias, and some British Sovereigns. By the way, I feel extremely strongly about taking delivery of your gold and NOT buying the ETF. But that's my personal belief for my personal account. I own gold for the safety and reliability of having real money close at hand. Buying the ETF version of gold completely undermines those factors.

Most gold ETFs won't ever let you take delivery. Many gold investors feel the same way: if you can't touch it, you don't own it.

But if you don't have the interest in taking ownership of physical gold, I'd suggest buying shares of the SPDR Gold Trust (NYSE: GLD).

If nothing else, you can trade this ETF for the next two months and pick up some solid gains before year end.

Or if you're options-savvy, you can buy in the money calls on GLD.

Again – unless you're a trader who's looking for a 2-month play on gold, I would suggest taking delivery and keeping your gold close at hand.

The world's currency crises are nowhere close to being solved, and the world's growth economies (like India) are consuming more gold all the time.

So – I hope you'll buy gold now for the first time, or add to your position.