In yesterday’s
issue of Resource Prospector I talked about the
idea of shorting new commodity ETFs. There’s lots of evidence that new ETFs,
especially commodity ETFs, are launched at the height of their popularity.
They can only fall from those heights.

There are a few exceptions. I will be publishing a special
report about my three favorite ETFs – funds that are actually designed to
make money, not lose money – in sectors that I think have plenty of
upside. 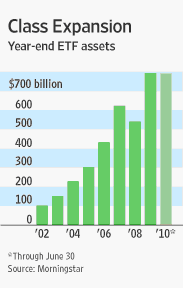 If you haven’t read
my commentary on ETFs before, and you’re wondering why firms would launch funds
that tend to underperform, all you have to do is look at this simple chart to
the right, and you’ll understand.

Every ETF has an expense fee, usually somewhere between
0.25% and 0.75%. So every time Wall Street sells another $1 billion in ETFs,
they’re taking $2.5-$7.5 million off the top – just for having the brilliant
idea to sell the public something they’re dying to own. Money has been flying
into ETFs, and no firm wants to be left behind. So they’re launching funds
based on anything they can think of- regardless of how good of an idea it is
to actually invest in.

That’s why I’m looking for opportunities to short these
funds.

It’s in a sector that I have long railed against as
“popular.” It has lots of approval and support from politicians, the media
and celebrities – but very little fundamental basis for investment.

And as if another handful of nails in the coffin weren’t
necessary, the investment in question is a commodity ETF.

Time and time
again, when a commodity ETF gets launched at the height of its popularity, it
presents an excellent shorting opportunity.

And right now, I challenge you to think of a sector that’s
hotter than lithium. Like the housing market before it, and dot-com stocks of
the late 1990s, lithium is a “sure-fire bet.” We’re told it’s different this
time, because lithium is the battery of the future.

Well, we all still live in houses, and use the internet more
than ever, but that’s small consolation for investors who saw their savings
go up in real estate and dot-com smoke.

Today, lithium is the must-have ticket to a future of
stock-market riches.

So California residents will essentially get a $12,500
discount on any new electric cars they buy. The two rebates combined are more
than 50% higher than the Federal Government’s first time home buyer tax
credit…

I don’t know about you, but even the $7,500 Federal Tax
credit strikes me as completely ridiculous.

Since when is the Federal Government capable of, let alone
responsible for, subsidizing automobile sales? I understand that a good chunk
of the aforementioned GM is still on the Government’s books, but you’d think
they might start to learn that their intrusions into the market ultimately
result in a plethora of unintended consequences that they’re remarkably
ill-equipped to deal with.

Okay, so I hope
it’s as clear to you, as it is to me, that lithium is getting frothy. To
accommodate the marketplace, the firm Global X Funds just launched a new ETF
based on lithium – called the Global X Lithium ETF (NYSE:
LIT).

This fund charges a 0.75% expense fee. That’s what you’ll
pay the fund managers up front when you buy the fund, and you’ll pay it again
every year.

You can look at the fund’s holdings by clicking here.
Suffice to say, that this fund contains 20 different companies that are
primarily involved in “some aspect of the lithium industry such as
lithium mining, exploration and lithium-ion battery production.”

It’s split just about right down the middle between battery
makers and lithium miners.

So how to short it? If you’re not already set up to short
stocks with your brokerage, you’ll have to do so. It’s no more difficult than
opening up the account in the first place. Then I’d wait for this ETF to
enter a downtrend and on any uptick enter your buy-to-cover order. It’s been
trading super-flat since it was launched, but I expect some momentum to build
around this fund. After all, it’s lithium – the wonder element.

I’d look for an exit from the short at anything greater than
a 30% dip after you’ve borrowed the shares.

There’s plenty of volume (about 50,000 units a day) so you
should be able to get your order filled. As always, be patient, and stick to
your principles.