It’s not a good time to be a commodity investor.
Metals are hopeless. Gold is at a three-year low, having fallen 15% in the past week. Silver prices haven’t been this low since 2010. Copper, platinum, palladium – all of them are in a full-on tailspin right now as the Fed’s $85-billion-a-month bond buyback plan has given the dollar strength.
Oil isn’t faring much better. Spot prices on light crude oil dipped below $90 a barrel for the first time all year yesterday. Oil prices have declined nearly 9% in April.
Soft commodities are also taking it on the chin.
Coffee has been on the decline for two solid years. The price of corn just bumped up against a 15-month low. Soybeans have been up and down, with prices almost exactly where they were a year ago.
The commodity investing picture is pretty bleak – unless you want to buy on the cheap and take a chance that one of these plummeting resources has hit bottom. That’s risky, though. When a commodity as reliable as gold has been for the last decade is tanking with seemingly no end in sight, it’s hard to feel safe investing in any commodity.
Amid this downward spiral, however, there is one natural resource that has thrived. It’s a resource that a year ago looked way worse than gold, silver or coffee do now, having declined steadily for four straight years. Now it’s making a comeback.
I’m talking about natural gas. While most other commodities have fallen flat, here’s how natural gas prices have performed in the past year: 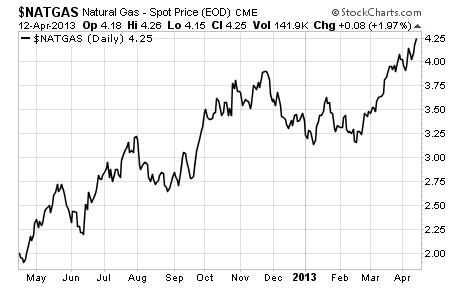 That’s a 118% gain, including a 35% kick in the past two months. Not bad.
Now, we should put natural gas’ run in its proper context. When the rally began last April, natural gas was dirt cheap – trading below $2 per million BTUs for the first time in more than a decade. Savvy commodity investors were bound to start snatching it up eventually.
My colleague, Kevin McElroy, saw this coming. Last April, Kevin wrote the following:
“I truly believe the opportunity we now see in natural gas will, in retrospect, appear to be a complete no-brainer. Right now, it’s tough to be one of the first investors in this hated and cheap commodity. But I don’t’ think you’ll be disappointed.”
Quite prophetic. But Kevin didn’t like natural gas just because it was cheap. There were plenty of reasons to like nat gas – especially at decade-low prices.
Global natural gas consumption is projected to increase 17% in the next four years, according to the International Energy Agency. China is the main catalyst behind those projections – its natural gas consumption is expected to double by 2017.
A cold, long winter has helped spark the run-up in natural gas over the last two months. Stockpiles have dropped below their five-year average for the first time since 2011. That’s also a reason to like natural gas over the long haul.
Natural gas supply is no longer outpacing demand the way it was for most of the past decade. Demand is finally catching up with the increased production hydraulic fracturing, or “fracking,” has allowed. After dipping in 2009, U.S. natural gas consumption has risen three years in a row – including a 4.4% increase in 2012.
But China is the major reason this natural gas rally isn’t over. Right now, China consumes only 4% of the world’s total natural gas supply – less than South Korea or Japan. However, consumption has already increased 37% in the past two years, and the IEA expects it to double in the next four years. Increased emphasis on “clean energy” by the most populous country in the world should pay major dividends for natural gas investors for years to come.
The best way to play the natural gas boom is to invest in a company like Chesapeake Energy (NYSE: CHK) or an ETF such as United States Natural Gas (NYSE: UNG). Respectively, they’re up 18% and 26% this year.
However, because U.S. natural gas exports are extremely limited right now, a better way to gain exposure to China’s natural gas boom is to buy shares of Cheniere Energy (NYSE: LNG) – the only U.S. nat-gas firm with a license from the Department of Energy to build an export terminal. It’s already paying off – shares of LNG are up 37% year-to-date and 70% in the last six months.
If and when the U.S. government loosens its vice grip on natural gas exports – 19 of the 20 firms that have applied for licenses to build export terminals have been rejected – other companies should benefit from China’s expected natural gas boom.
Long term, there’s plenty of reason to believe in natural gas. For now, it’s simply the fastest-rising commodity on the market.
Not that there’s much competition.