That’s why it pays to be a commodity investor, because
we’re still ahead of the crowds; we’re contrarian.

Most, if not all investors, are heavily into broad index
mutual funds. They’ve been buying the market, and hoping that it will
turn around.

I’ll keep my ‘hope’ for my favorite sports teams (go
Philadelphia!), and instead use my brain to find investments that are
forward looking. What has worked in the past might again work in the
future – but not simply because it worked in the past.

And since we’re
coming up on 4th of July weekend, I’m looking for patriotic
investments, like lead.

(I’m always looking for contrarian investments, so if
you have any investments that you truly hate right now, please send them
to [email protected])

You might be wondering why I say lead is a patriotic
investment.

A patriot is someone who loves his country – and what it
stands for. I still think this country stands for the freedom to do what
you wish, as long as your actions do not infringe on someone else’s
freedom. I’d like to think that this country still stands for inalienable
rights endowed to all people by the very virtue of their
person-hood.

One of those rights is recognized in the Second
Amendment of the Bill of Rights:

“A well regulated Militia, being necessary to the
security of a free State, the right of
the people to keep and bear Arms, shall not be infringed.”

I feel obligated to point out that this right to bear arms, and the other
rights in the Constitution are not “granted” by the Federal Government.
The government (any government) does not have the power to grant such
rights anymore than it has the power to take them
away.

It’s an important distinction – and one that’s lost on
most people, even the esteemed journalists at The Wall Street
Journal get it wrong. Here’s a headline from a recent story about
the Supreme Court overturning Chicago’s handgun ban:

Of course, the right to bear arms is completely useless
without ammunition for those arms. And today, lead is still the metal of
choice for most ammunition manufactured.

But lead isn’t
just for bullets – only three percent of all lead smelted today finds its
way into ammunition.

It’s primarily used in an almost innumerable amount of
manufacturing applications. Most cars still have lead-acid batteries
under the hood.

Lead is still used in some industrial outdoor paints,
like those used on roads. It’s used in many electronic devices found in
basically every sector of the economy. It’s used to protect from
radioactivity generated from x-ray machines and other medical
devices.

The biggest growth market for lead today is in lead-acid
batteries for the burgeoning automobile market in China, India and the
rest of Asia.

I wrote about lithium recently, and it’s certainly a
great battery material. But it’s about 5-7 times more expensive and not
as accessible as lead.

And as you probably realize, lead is about as hated as
any commodity in existence. Between lead bullets and lead poisoning from
paint and industrial applications, lead is a four letter word in the
investment world.

What you might not realize is that lead prices are
extremely highly correlated with oil prices.

Take a look at this five year chart of lead spot
prices: 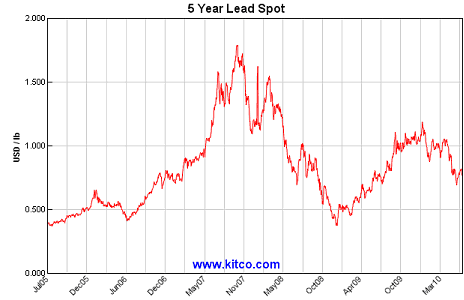 You’ll notice that prices only spiked following the
record oil prices of the summer of 2007. They quickly dwindled along with
oil prices through the latter half of 2008 and 2009.

That’s a strong correlation, and I expect it to continue
– especially since lead production has been falling for the past 5 years.
Look at this data from the US Geological Service:

You can see that most lead production came from scrap
recycling. At the same time, mine lead production has been falling: about
10% over the past five years. That’s not sustainable.

Lead prices will get pulled higher by higher oil costs,
as well as dwindling production. Today, lead is cheap and hated, but that
situation won’t last forever.

The easiest way to invest in lead is to buy the
Australian mining giant BHP Billiton (NYSE: BHP). Of
course, they mine a lot of different substances, so it’s not a pure play
on the price of lead, but they’ll benefit from increased demand and
higher prices.

BHP is one of the blue chip companies that’s going to be
around no matter what – so I’d say it’s safe to buy shares anywhere south
of $65. Collect the 2.4% dividend, and ride the commodity bull as prices
in lead and everything else keep rising.

Have a great 4th of July,