Today I want to talk about why I think the next couple weeks
will be your last opportunity to buy inexpensive oil stocks this summer, and
possibly all year.

The reason?
Seasonality. Oil prices tend to hit their yearly highs in the third quarter.
That’s largely due to increased demand from millions of Americans and
Europeans driving more for their summer vacations.

This tendency seems to fly in the face of one of those
investor “rules” we’ve all heard a million times before: past performance
does not guarantee future results.

It’s a mantra for mutual fund managers, financial advisers
and newsletter editors. It has an almost Shakespearean meter to it, and if
you say it enough you become numb to opportunities on the basis that all of
the information you have is from the past – and therefore, unhelpful when it
comes to making decisions about the future.

But that’s a perversion of the intent of this “rule.” It’s
really not a rule at all, but instead of a piece of catch-all legalese. If I
use that phrase, I am magically absolved of any responsibility should you
follow my investment recommendations.

It should probably be shortened to “there are no guarantees”
which already goes without saying. So when I say the next couple weeks could
be your last chance to buy cheap oil stocks, I’m talking about degrees of
possibility, not guaranteed certainties.

So let’s look at the possibilities…

Here’s a chart
showing average price changes between 1978 and 2007 – which conveniently
omits the skyrocketing prices in the summer of 2008, and the bizarrely low
oil prices in 2009: 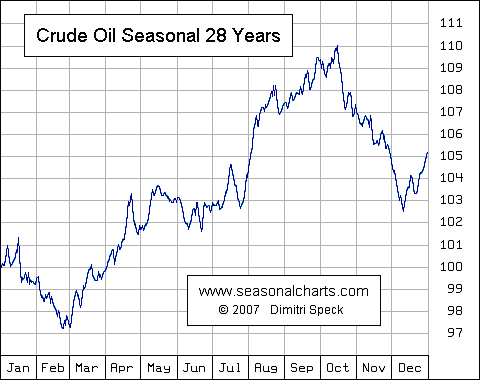 You can see how prices tend to hit an initial high in May,
then a slight hesitation in June followed by a steady surge through
September.

So far this year, oil prices seem to be following seasonal
tendencies: 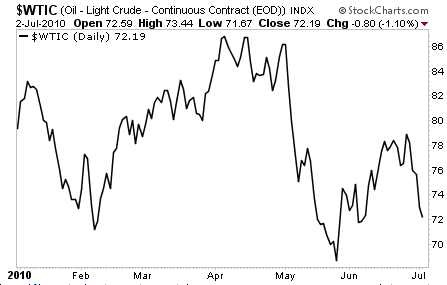 The companies that benefit from higher oil prices aren’t
always the blue-chip giants. Companies like Exxon-Mobil (NYSE:
XOM) and BP (NYSE: BP) hedge their oil production
so that their bottom line isn’t hurt – or helped – significantly by seasonal
price swings.

So who does benefit?

Oil services companies. Yes…like Transocean (NYSE:
RIG) – the deep sea driller whose rig is plumb in the middle of the
worst oil spill in history.

And right now, RIG is selling for a rock-bottom trailing PE
of about 5.5.

That’s to be expected. No one wants to own this stock
because there’s really no telling if they’ll be further embroiled in any
liability or whether they’ll emerge unscathed.

That honor would go to Noble Corp (NYSE:
NE) with a trailing PE of just 5.27. The stock has been beaten down
almost as bad as Transocean, even though they have nothing to do with the
Gulf oil spill.

This $8.45 billion company is headquartered in Switzerland,
and they’ve shown an ability to at least match gains made in the price of oil
over the past 3 years: 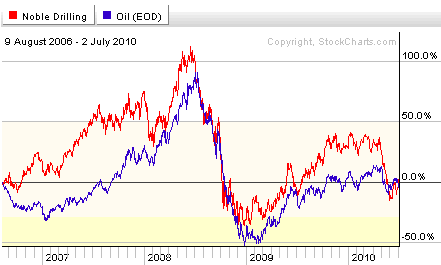 If you’re looking for a way to profit from higher oil
prices, I’d suggest averaging into Noble Corp over the next two to three
weeks, but I wouldn’t chase shares higher than $35 – that’s about the median
price for the past 52 weeks.

Do you have an oil company you’d like me to write about?
Please send me the stock symbols and any specific questions at [email protected]