Gold is entering a tenth
straight year of gains, and if we’re going to be honest with ourselves, that
trend should give us pause before we add to a position in gold.

But don’t sell your gold just yet. According to recent
article from Bloomberg, there’s still plenty of upside.

“Dan
Brebner, an analyst at Deutsche Bank in London who is the most accurate
forecaster so far this year, says the metal may reach
$1,550.”

Listen, I just bought some
gold a couple weeks ago, and I’ll likely buy some more over the coming weeks
and months, but I’m looking out over the horizon for the asset to buy today,
to benefit from the next decade long uptrend.

I think I’ve found what I’m
looking for.

And though I’ve written about
this commodity before over the past six months, I’d be surprised if more than
one or two of my readers have followed my recommendation to buy shares of
companies that produce it.

Almost no one buys during the early stages of an
uptrend – by definition. If everyone was buying, prices would not be low, and
the upside would be very limited.

But right now, this other
yellow metal is selling near its five year lows. This industrial metal is in
a sector that’s expected to have huge amounts of new demand from China and
India. There’s already steady demand from Europe and the United States that
currently outstrips production.

The last time the market saw
a supply crunch in this commodity, you could have made 500% gains in less
than four years by buying one simple investment. I’ll reveal the name of this
stock in a minute. 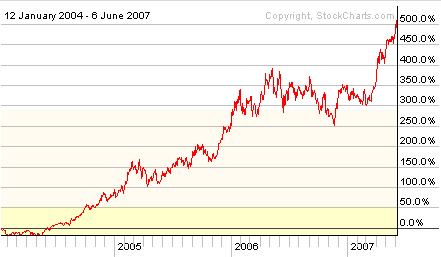 The commodity I’m talking
about is uranium. 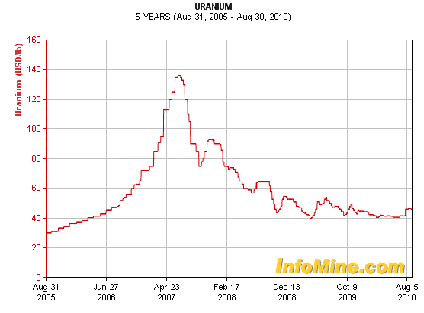 You can see that uranium is
selling near its five year lows. I think we’re in the beginning of a long,
steady uptrend for uranium prices.

And I fully realize that a
thousand readers just clicked away from this page at the mere mention of the
radioactive metal.

Even though Iran has been in
the news nearly every day for the past few months with headlines about its
nuclear power facilities, uranium is nowhere to be found in the mainstream
investment media. No one cares – yet.

I’m sure we’ll see lots of
coverage on uranium prices after they begin to spike, but that’s why I want
to alert you to the trend today, so you can get in early.

So why is the price of
uranium going to spike? Take a look at this chart: 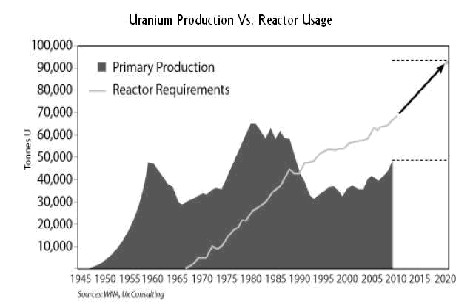 For the past 20 years, demand has outstripped production.
I’ve talked about this discrepancy in past issues of the Resource
Prospector. On April 13, 2010, I wrote:

“Where is the supply coming from to
meet current demand?
The answer is: nuclear bombs.
A New York Times article from November 11, 2009, revealed that
nuclear power plants in the United States get a large amount of their fuel
from dismantled Russian and U.S. bombs.

Today, former bomb material from Russia accounts
for 45 percent of the fuel in American nuclear reactors, while another 5
percent comes from American bombs, according to the Nuclear Energy Institute,
an industry trade association in
Washington.”

That’s a situation that
can’t last forever. The program to dismantle bombs for
nuclear fuel (called Megatons for Megawatts) has so far claimed to have
produced 11,047 tonnes of
uranium – or about 25% of
the supply needed for one year. But even if demand stays the same,
there is a very finite amount of de-weaponized uranium left in government
stockpiles.“

It’s a matter of when,
not if, uranium prices will spike. And an August 30th
Reuter’s story just might mark the beginning of the trend:

“The nuclear renaissance is centered in Asia, where
China plans to more than double nuclear power capacity by 2020.

At the same time, Russia says it will stop downblending
weapons grade uranium from 2013, creating what some expect will be a 20
million pound hole in an already tightening world supply.”

My recommendation is simple. One company currently produces the lion’s
share of uranium: Cameco Corp. (NYSE: CCJ). They own the
world’s largest uranium mine which provides about 17% of the world’s uranium
every year. No other mine even comes close.

I fully expect this company
to multiply gains made in the price of uranium. I’d suggest buying this
company now, today, and holding it for at least ten years. I firmly believe
that there isn’t a safer way to get rich from commodities today than to buy
this company.

disclosure: no position in Cameco as of this publication