We're living through strange times. Most of the entire Western world actually believes that wealth can be created by the whim of a central banker. For so long, the idea of paper money stood in for real assets (like gold and silver) that people now confuse the idea of money with paper and paper with money, that paper is now perceived as money.

When you can utter such a ridiculous statement with a straight face in public – at a dinner party for example, and not have a majority of onlookers immediately and soundly disagree with you – you know that the world has gone crazy.

So when I refer to an uninflatable asset, I'm referring to commodities. I'm also making up a word. It's not in the dictionary. And for many people, it has no meaning anyway.

Here's why I'm still an ardent commodity investor – and why I am extremely excited about the opportunity you and I have TODAY to buy a commodity investment at super-cheap prices.

If you look around the globe and certainly within our borders, you notice one thing has not changed: we still have extremely high levels of debt. Europe has so much debt it can't even begin to make a plan to deal with it. Europe just keeps kicking the can further down the road.

Taking on more debt. Reshuffling the deck to see if they can find a way to deal a royal flush on every hand.

We know that the Europeans have decided to avoid default at all costs. And those costs include the destruction of the European unit of account: the Euro.

They'll destroy the Euro for the dwindling chance that they'll save the Euro-zone.

In the end, both will be dismantled. And the only things left will be the actual people of Europe, and the real assets they own.

And the only things left will be the American people and the real assets they own.

If those assets aren't real, and are derived entirely from the paper-dollars they own or lay claim to, then they will be out of luck.

But if those Americans and Europeans own real businesses, real productive farmland, real timber, gold, oil, silver, copper, natural gas, coal, iron, etc. – then they will have the means to deploy those assets to profitable growth assets following the fallout of this massive sovereign debt meltdown.

So one way to own such an asset is to buy one of my favorite ETFs: the Market Vectors Jr. Gold Miners Fund (NYSE: GDXJ).

I first recommended this fund to some of our highest paying subscribers back in August of 2010. 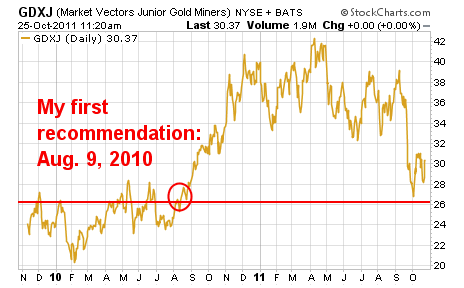 And since then, it's been a rocky ride. The fund nearly doubled in the 6 months following my recommendation, and it's recently fallen in price back near where I recommended buying.

But if you look at the price of this ETF divided by the price of an ounce of gold, a different story emerges. 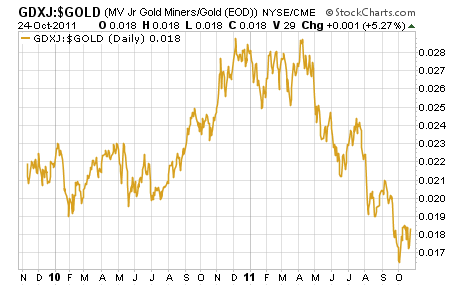 Since the fund launched in late 2009, it's never sold so cheaply compared to the price of gold. And since this fund's holdings are almost all gold miners and explorers, it's a salient point that you've never been able to buy it so cheap on a gold basis.

My suggestion is to buy this fund now. I believe we'll see a repeat performance of when I first recommended it back in August of 2010. That is, I think it will double from here within the next year.

I normally don't make such predictions. I hate to put myself out on a limb, because there's really no upside to being right, and plenty of downside to being wrong. But I feel strongly about this investment.

Pick up shares of GDXJ today, and I think you'll be handsomely rewarded.