And that’s not because the media just needs something to report on. The
Euro is in big trouble, and so is every country in the Euro-zone and beyond
that’s tied to it.

I’ve written many times about this crisis. And I’ve said many times that
the Atlantic Ocean will not insulate us from the crisis in Europe. Yes,
Europe is a 7 hour plane ride – but currency waves made in Europe take less
than a second to reach the United States with the advent of light-speed
fiber optics, satellites and other modern technology.

I wrote about this same issue last November when it was Ireland’s turn to
be in the news. I’m re-posting this commentary because my advice is
essentially unchanged. It’s unchanged because the world’s paper currencies
are in WORSE shape than they were just 10 months ago when I wrote this piece about Ireland.
They’re worse than they were 18 months ago when I started publishing the
Resource Prospector.

They’re far worse than they were when I began buying gold at $800 an ounce,
and silver at $15 an ounce.

This time it’s Italy’s turn in the news. But eventually it will be the Euro
itself that makes headlines, not just one of the many insolvent European
banks. 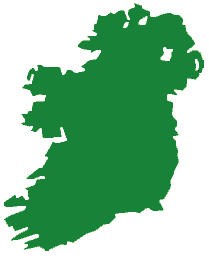 "Ireland will never be
able to afford to pay back the debt it owes. Its debt problems are but a
microcosm of much of the rest of the western world. What is playing out in
Ireland today will one day soon play out here across the pond in the United
States.

So we should pay close attention, because for reasons I will reveal below,
the scenario is hugely bullish for commodities of nearly every
stripe.

I like to think of these European debt problems as a look into our own
future here in the United States.

I think we can reasonably expect the word `default’ to sneak into the
vocabulary of Treasury bond investors. Our debt load is fast approaching
levels seen in Ireland. We have no plans to reduce our deficit.

And unlike Ireland, we don’t have a group of member states much larger than
us that will guarantee our debts. The buck stops with us. Colorado can’t
bailout California. North Dakota can’t bailout New York.

I think we’ll see 9% yields (and higher) on our 10 year debt sometime in
the next few years.

In the meantime, buying commodities is somewhat of a no-brainer.

As long as interest rates are lagging the real price of holding dollars,
gold and silver will remain attractive for protecting capital.

And with Euro weakness bolstering the dollar in the short-term, there is
downward pressure on commodities. Use this bad news from Europe as an
opportunity to use your relatively strong dollars to buy physical gold and
silver as well as relevant securities."