There’s been lots of chatter
about a gold bubble. But I think you can make a much stronger argument that
Treasuries are in the midst of history’s biggest bubble right
now.

Let me back up, because I know I’m making some short-cut assumptions that
you might not make for yourself.

1) I’m assuming that gold IS
money. That is, it’s a store of value and a medium of exchange.

2) I’m assuming that the
definition of a bubble describes when an asset is overbought to the point
that its price is much, much higher than it should be.

3) If I can safely make these
assumptions, then I think it’s fair to compare gold to another form of money:
the dollar, and by proxy U.S. Treasuries.

If we can agree that U.S.
Treasuries are a fair proxy for the dollar, and that gold is money – then I
truly struggle to see how ANYONE can come to the conclusion that gold is in a
bubble, while simultaneously seeing Treasuries as not being in a
bubble.

That $90.6 billion includes
all gold for electronics, jewelry and bullion.

According to the 2008 US
Geological Survey, less than 10% of all gold is turned into bullion – most of
it becomes jewelry, or is used in dental or medical services.

So it’s safe to say that only
about $9 billion worth of gold was turned into bullion last year – maybe a
little more, but not much. The U.S. mint only minted about $1.7 billion worth
of gold into gold eagles, buffaloes, etc.

So, let’s round it up to an
even $10 billion worth of gold bullion sold last year. That’s small potatoes,
really.
Forbes magazine publishes an annual list of a few dozen billionaires who
could each buy all of the world’s annual bullion production.
Our Federal government actually loses more than twice that every
year.

So $10 billion seems like a
drip in the ocean.

In any event, that $90.6
billion of new gold in world circulation is still a tiny number, especially
when you compare it to the amount of money going into US Treasuries
today.

A recent article in
Business Week reminded me of the size of the Treasury
market:

“The government will
auction $69 billion of the maturities next week, according to the median
forecast in the survey, compared with $70 billion last month and a
record-tying $81 billion in February.”

So at the current sales pace, the U.S. Treasury will sell at least 10 times
more Treasury notes than the total amount of gold produced this year. But
that’s just U.S. bonds – it doesn’t account for any debt sold out of the
Euro-zone, or Asia, South America, Africa, or Australia – which is nothing to
sneeze at.

Click on this chart below for
the full-size version, to see how US Treasury sales have ballooned over the
past 10 years: 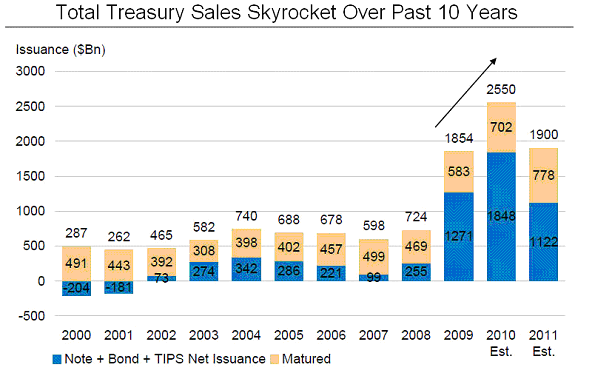 Right now, Treasuries are still selling near their record
high prices. The yields are near all time lows. There’s huge demand for
Treasuries, and both in volume of sales as well as growth of sales,
Treasuries dwarf gold.

If you’re eschewing gold, but buying Treasuries (especially
long-term Treasuries) I’ve got to wonder about the thought process –
especially as more and more sovereign debt issues spring up across the pond.
Today Portugal’s debt just got downgraded, and if you think the Atlantic
ocean will protect us from the same exact problems, then I guess you should
keep buying Treasuries.

Drop me a line if you feel inclined to set me straight:
[email protected].