When I tell people my investment strategy they typically say one of two things:

That's not the part of my investment strategy that makes people call me an idiot.

But when I tell them that I'm waiting for the price of an ounce of gold to come close to the Dow Jones Industrial Average index – that is when they call me names and question my financial knowledge.

Before you join the bandwagon of people calling me stupid, take a look at this 80 year chart showing the Dow/Gold ratio. 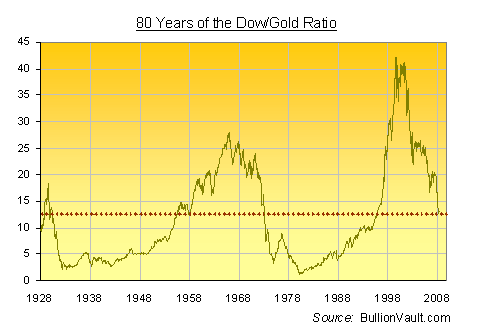 The Dow and gold hit near-parity in the early 1930s and the early 1980s – both of these occasions were multi-decade lows for the Dow, and the best times to build a position in stocks in the 20th century. No question about it.

Lately, the Dow-Gold ratio has been plummeting. 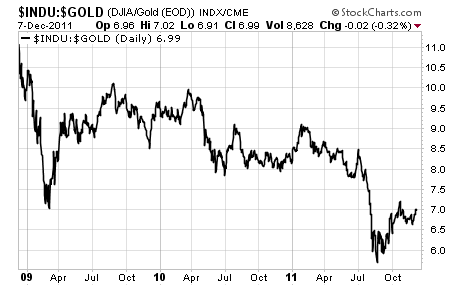 That's because gold is still in a strong uptrend, and stocks are flat at best.

And while I don't have too many takers willing to bet against gold, plenty of folks question how the Dow could fall so far.

So besides the ordinary reasons to be bearish on stocks now – such as massively unsustainable sovereign debts, ridiculously high unemployment, declining GDP, housing, etc – what's an even more concerning trend?

If you're reading this letter, I can probably guess two things about you.

And if I'm correct, then very soon you will likely be one of the millions of people in your generation who for the first time will stop contributing to a mutual fund, and start withdrawing from it.

No one is talking about those same boomers who will now begin drawing down mutual funds en masse.

Boomers who began contributing to mutual funds in their late 20s and early 30s – back in the late 1970s and early 1980s – will now begin reversing this trend.

The largest generation in American history, the biggest group of investors and savers will now sell stocks.

Yes, some folks began selling in 2008 – but now it won't just be active individual investors selling, now it will be everyone, en masse – sustained selling for the next few decades, peaking sometime within the next 10 years.

So when someone asks me "how will the Dow drop so much?"

Until then, I'm buying gold. I don't want to own an asset that has such a momentous trend reversal in its future. I'm not fighting the baby boomer generation's selling. But I will be ready to profit from it.