It’s been one week since I last wrote about platinum.

Last Tuesday, I told you that I would be selling shares of the ETFS Physical Platinum ETF (NYSE: PPLT) – if platinum prices stayed above gold prices

Well, the verdict is in – platinum has been more expensive than gold for close to 10 days now, and it’s time to close out the trade.

The last time I closed out this trade back in 2012, I scalped a 12% gain over the course of a few months. Some readers wrote in asking why I didn’t let the trade ride a little bit longer.

You might be familiar with the old investment axiom, “Let your winners ride.”

But that old saw directly contradicts the entire purpose of this platinum trade. Look what happened to the price of PPLT AFTER I sold it last March: 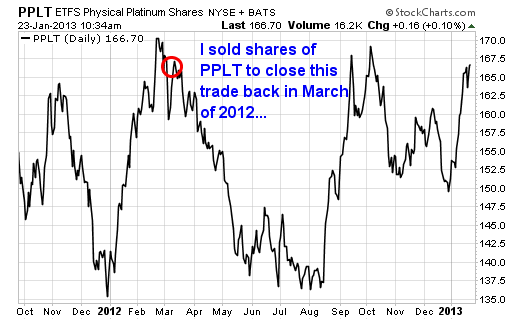 I sold PPLT back in March of last year because physical platinum sold for less than physical gold. That’s an anomaly. It almost never happens. When it does, we usually see platinum rally.

When platinum again became more expensive than gold in March – I sold PPLT for a quick gain.

I didn’t try to squeeze out another percentage or two. The trade had run its course. If I had held on for even another day or two, I would have been punished.

It’s okay to wait for the market to verify your suspicions – I wouldn’t immediately sell (or buy) platinum just because of an intraday price discrepancy.

I’m not being greedy, I’m not trying to time tops or bottoms – I‘m just waiting for the trade to come to me.

This last trade, I actually put in a stink bid of several dollars below the price of platinum. I bought on my terms.

Platinum is down about 50 cents as of this writing – but if you’ve been playing along at home, it’s still more expensive than gold, so as far as I’m concerned, it’s time to exit this trade.

If you missed out on this trade this time, don’t worry – something else will come along. And I’ll keep you informed.

If you’re interested in getting back into precious metals investing, my colleague Tyler Laundon believes this is one of the best times of the last decade to buy gold stocks. He has two specific stocks in mind to take full advantage of the resumption of the gold bull market.

Tyler expects an upside breakout in gold stocks to resume any week now… Right now, the two companies he expects to lead the charge are cheap and offer outstanding upside… with only modest risk. Get the full story here to learn more about these gold stocks from “The Heart of Darkness.”