Before I get started, I want to invite you to my upcoming FREE webinar “My Game Plan for the Year Ahead – Earn $1,200 a Month”. I will also introduce the strategy behind my “Apple Portfolio,” along with a free trade. What’s more, I’ll be going over another addition to the Options Advantage service that’s sure to excite those who like selling options for income. Seats are still available, so reserve your spot now by clicking here. If you’re unable to attend, don’t worry. If you’re on the list, we’ll send you the recorded video to view at your leisure.

If you’re like most investors, you probably missed the high in Apple (NASDAQ: AAPL). Today, a lot of people are buying shares of Apple, hoping that the company will push its way back up to new heights.

In my opinion, that’s not likely to happen.

Apple is one of the biggest success stories in corporate history. It grew an amazing 6,500+% over the past nine years. If it grew another 6,500%, it would be worth more than $35 trillion, more than twice the gross domestic product of the United States. 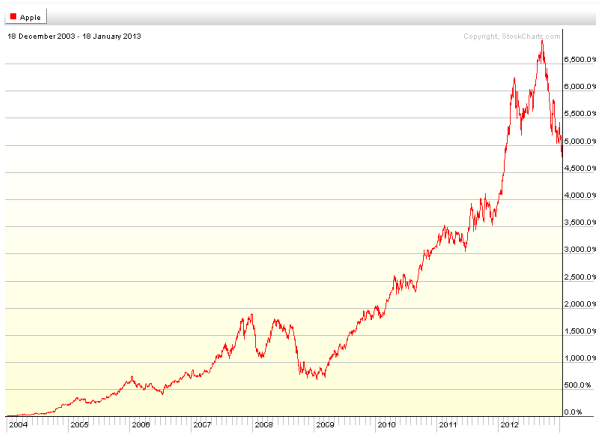 So if you think you’re going to see another 6,500% gain – or anything like that from Apple – be prepared for disappointment.

The good news is you don’t need to buy shares of Apple to profit from future strength. In fact, since Apple is so big today – more than $500 billion market cap – it’s become a great vehicle for trading options.

In my upcoming webinar this week (details below), I will discuss my upcoming Apple options strategy in plenty of detail. For now, though, I’d like to talk about the basic premise of the strategy.

Essentially, I’m able to manipulate the likelihood of the trade’s outcome. As I increase the probability of a winning trade (I call this my “probability of success”), my potential profits will decrease. It’s that simple … well, almost.

As most of you know, Apple recently surged above $700. In doing so, the stock became very overbought. Due to this extreme overbought state, I believed the stock was well overdue for a pullback … at least in the short term.

Now that I had an assumption about the stock’s direction in place, I moved onto my strategy of choice – the bear call spread.

The ideal condition is for the spread to expire worthless, thus allowing you to keep the premium collected at the time you sold the spread. In order for this to happen, the underlying will have to close below the lower strike call option that you are short.

About four months ago, with Apple trading around $690, I wanted to choose a short (sold) strike for my bear call spread that met my risk/return objectives. I prefer a win rate/probability of success in the 80%-95% range.  As such, I liked the Oct12 750/755 bear call spread. This means that I sold the 750 call and bought the 755 call. My objective was for Apple’s share price to remain below 750 through option expiration on October 19. That way, both options would expire worthless and I would keep the credit received when I initiated the trade.

I could have collected a higher premium if I sold a strike that was closer to the current price of Apple. But that would lower my probability of success. And don't forget, the ultimate goal is to increase your probability of success while taking on risk that allows for a return that is suitable for your income goals.

For this trade, I gave myself a nice margin for error, which increased the probability of my trade’s success. Here, the 750 strike allowed for a $60, or 8.7%, cushion. In other words, Apple could move as much as 8.7% against my expectation and I would still reap the maximum gain on this trade. That’s the beauty of credit spreads – they allow you to profit even though you may be wrong on your analysis of the underlying stock.

With a probability of success over 86%, I felt very good about the future success of the trade. Remember, if I have an 86% chance of winning, the guy on the other side has only a 14% chance. That’s basically pure speculation, and something we want to avoid.

Several days after I mentioned the trade, Apple began its latest decline. Seven days into the trade my Apple bear call spread was essentially worthless, meaning you could have taken off the trade for close to the maximum profit of 15.5%. If you had instead waited until the spread expired, you would have made the entire 15.5%. It’s certainly not a bad way to bring in monthly income.

This is just one example of many that I have regarding Apple.

Over the past several months, I have been using credit spreads to trade Apple. And so far I have had great success. Since May I have logged a win ratio of more than 85%, with each trade lasting about a month.

In fact, because of the success, I recently started a new Apple portfolio within the Options Advantage service.

Rather than go into great detail about the credit spread strategy here, I prefer to teach in a real-time environment. It’s a more practical and useful way to show self-directed investors my step-by-step approach. Moreover, I’ll be giving away my first Apple trade of 2013 as part of my upcoming FREE live webinar “My Game Plan for the Year Ahead – Earn $1,200 a Month”.  I look forward to having you join me this Thursday, January 24th at 6 ET.

Editor's note: If you would like to learn more about options and how you can generate steady income month in and month out… then consider taking a free, 30-day trial to our real money alert service, Options Advantage. You’ll discover exactly how our resident options expert, Andy Crowder, is using high probability trades to steadily grow a $25,000 real money portfolio. Every trade is executed for real… and readers are alerted instantly, so they can invest right alongside Andy. Click here to try Options Advantage, free.