That statement flies in the face of commonly held wisdom
repeated ad nauseum by investment experts and the investing public
alike.

I fully expect to be “taken to school” by any number of
readers for this statement, but hear me out…

There are two basic reasons why sentiment
doesn’t matter for gold, or at least not yet.

The first is that gold’s price has very little in common
with broad market investor sentiment.

If you look at any number of “sentiment” metrics, you can
put together a pretty tight little theory that betting against sentiment is
almost always profitable.

Take a look at this chart I cribbed from
Pragmatic Capitalist which shows consumer sentiment. I’ve taken the
liberty of plotting the S&P 500 index (in red) directly over the
sentiment index (in dark blue): 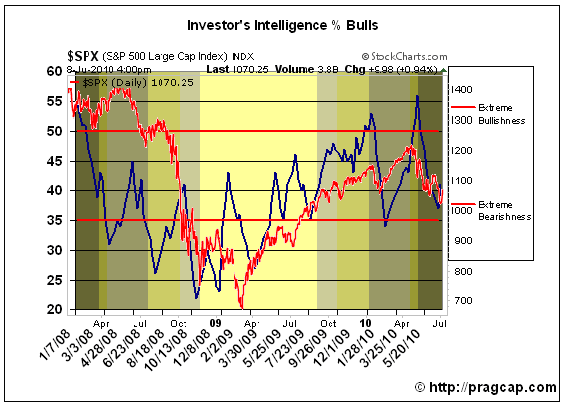 You can see how buying the S&P 500 when sentiment
wasextremely bearish and selling when it was extremely bullish would have let
you avoid almost all of the market downturn, and let you enjoy nearly all of
its uptrend.

But gold behaves differently. Sometimes it rises or falls in
tandem with the broad market. Sometimes it moves opposite the market.

Here again, I’ve plotted the S&P 500 in black, but I’ve
plotted it against gold in gold, for the same time period as above: 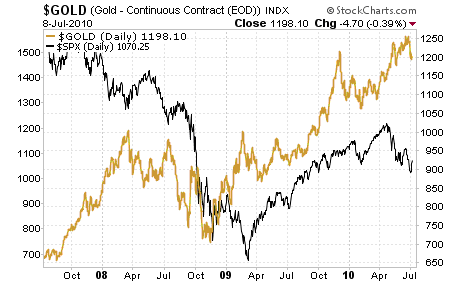 You can see that gold is all over the place with respect to
the broad market. There are times when gold is a mirror image and times when
it’s in lock-step.

Even if you back this chart out to 20 years, gold and the
S&P 500 have very little in common: 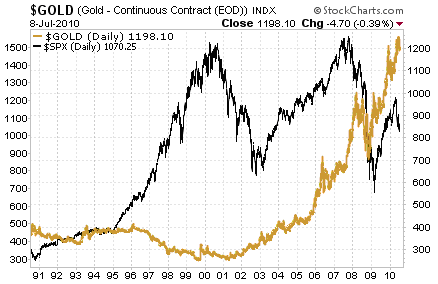 If there’s little correlation between the broad market and
gold, then it makes little sense to look to broad market sentiment as a
primary reason to be long or short gold.

Okay, so my second reason for ignoring sentiment when it
comes to gold, is that gold’s “rise” in price is due largely to a lack of
confidence in paper currency. Fair or not, I’ll use the dollar as a stand-in
for all paper currencies.

Normally when people talk about the dollar, they’ll
reference the U.S. dollar index (NYBOT:
DX-Y.NYB) – but I find that
index to be largely irrelevant to gold. That’s because the index trades
against other paper currencies in Europe and Asia.

This index can go sky-high, and all it means is that the
dollar can buy more Euros/Yen, etc. At the same time, gold can still move
much higher.

Over the past three years, gold has doubled, while the
dollar index was in a range between 72 and 88 – with seemingly very little
correlation between the two. 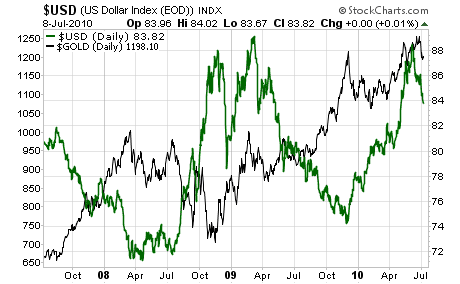 If you think about it long enough, you start to realize that
gold isn’t valued in dollars. Dollars are measured in how much gold they buy.
Over the long-term, sentiment has nothing to do with gold’s ability to store
value and act as a medium of exchange.

I don’t know how much longer gold will stay at these levels,
but it’s my belief that this dip is a good opportunity to buy more
gold.

And of course, you should consider buying gold stocks as
well.

Right now my favorite junior gold company is still selling
for under $4 a share. This company mines gold in North America, they trade on the AMEX and they
have gold in the ground worth many times their market cap. This company will
eventually sell for its intrinsic value – and when it does, today’s
shareholders will easily see five to ten times their money returned to
them.

I strongly advise reading all about this company to see if
it’s right for your portfolio.
Click here for the full story.