Public Cartel: In the public cartel a government is involved to enforce the cartel agreement, and the government’s sovereignty shields such cartels from legal actions. – Wikipedia

Quietly, CEOs of large-cap, dividend-paying companies have become the most powerful people in the world.

All because right now large-cap, dividend-paying companies – and their stocks – are the most sought after asset class in the market. 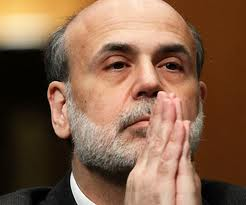 Their quiet rise to fiefdom has been largely aided by the Federal Open Market Committee (FOMC), and its low interest rate policies.

Last week’s announcement by the Fed that it "currently anticipates that economic conditions… are likely to warrant exceptionally low levels for the federal funds rate at least through late 2014" has only helped fuel investor demand for large-cap, dividend-paying stocks.

No longer do investors seem to care what business these companies are in, as long as they pay dividends.

And as long as their yield is similar to the competition, the cartel will remain intact. That means the paltry payouts from many large-cap dividend companies will continue.

I realize this might be an unpopular stance. But consider the following…

Today, the S&P 500 dividend payout ratio is close to its all-time low. It currently pays out around 30% of earnings in dividends versus an average payout of around 50% during the past 60 years.

This low payout ratio means that the yield on the S&P 500 is also near historic a low, at less than 2% (the following three charts are courtesy Standard & Poor’s and Robert Shiller).

Yet at the same time, earnings in the S&P 500 are near historic highs. 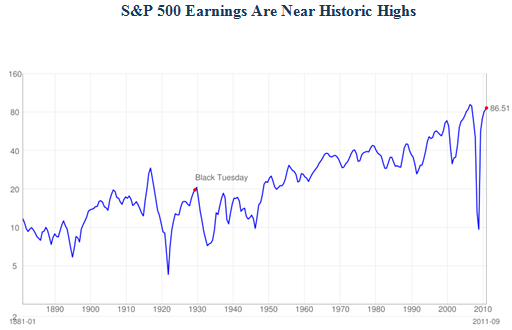 Why would S&P 500 companies be holding so much cash instead of returning it to investors in the form of dividends?

There are a couple of theories…

First, managers could be concerned about a 2008-like melt-down, and they want to be financially prepared.

Or possibly concern over a European financial crisis, which would precede the above scenario, has managers choosing to stash cash instead of distribute it.

I have my own theory…

These CEOs didn’t get where they are by giving things away. They are seasoned executives that make tough – and not always popular – decisions.

They fight tooth and nail to gain market share for their companies by keeping costs down, passing price increases on to consumers when they can and finding whatever loopholes possible to keep taxes and other payments to the government to a minimum.

In short, they are capitalists.

So when the benchmark 10-year Treasury is yielding only 1.9%, almost exactly the same as the S&P 500, there is little competitive rationale for these managers to dramatically increase their dividend payouts. 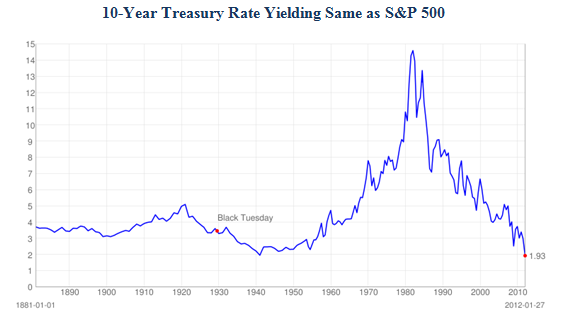 They don’t need to out-pay the competition. In this case the field has been set by the Fed and its low interest rate policies. And large-cap, dividend-paying companies are playing ball by not breaking with the cartel and increasing their payouts to historical norms.  No reversion to the mean here.

But cartels don’t last forever. That’s because there is always an incentive to cheat the cartel agreement.

Each company will want to attract more investors, and at some point this will lead large-cap dividend companies to increase their stocks’ yields. When that time comes, you should buy these stocks . but not now.

For the record, I’m not saying to SELL your large-cap dividend stocks. I’m just saying to be very careful piling more money into them right now at low yields. The way to make money as a dividend investor is to buy at an attractive yield, hold, and collect the ever-increasing dividend as the company grows.

Buying when yields are near historical lows runs counter to this effective wealth-generating strategy.

Right now there is a better way for investors to capture yield and expedite the large-cap dividend cartel’s breakup .

Buy the new entrants and mavericks.

These are companies that are going their own way, and initiating or steadily increasing their dividend payouts far above the historical average.

In many cases, the new entrants and mavericks are mid- and small-cap dividend paying companies.

While many investors are seeking the safety and stability of the large caps, many smaller companies are offering higher yields and better growth prospects.

These smaller companies will grow faster as the economy continues to recover. And they have a history of performing far better than large-cap dividend stocks.

The first chart shows the mid-cap VOE (in blue) and the small-cap VBR (in green) clearly outperforming the large-cap VTV (in red) since the market bottomed in March 2009.

Both the mid- and small-cap ETFs returned around 50% more than the large-cap ETF over this time frame. 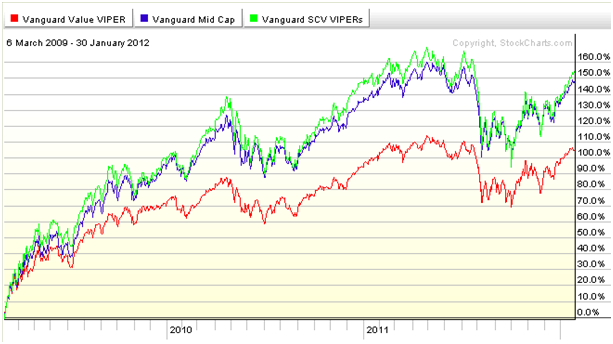 The myth that mid and small caps get hurt far worse during recession is demolished in the next chart, which shows these three ETFs from the market’s high in 2007 to its low in March 2009. As you can see, all of these funds lost the same amount, around 60%. Big, medium and small were all treated equally. 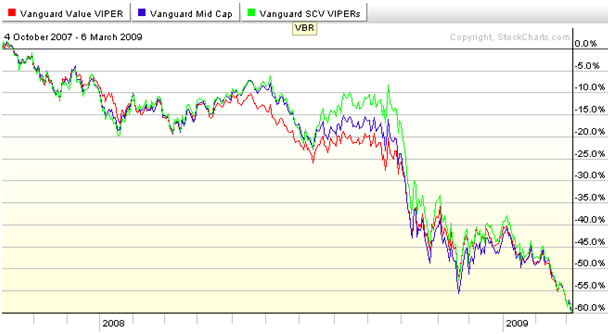 Right now, these three funds are yielding between 2.1% and 2.6%, and have PEs between 10 and 12. In other words, the cost to investors – and the payout – is essentially the same.

But history has shown that smaller dividend-paying companies outperform over the long term, and hold their own during recessions.

Right now – with investors literally crawling over each other to buy defensive large-cap dividend stocks – I think it is wise to step back and assess the situation to decide what strategy will work for you over the long term.

And that means not playing directly into the hands of the large-cap dividend stock cartel. Be a maverick, and buy only dividend stocks that offer sustainable and superior yields. Hold them for the long term as the benefits of compounding interest set in (that takes around 10 years).

If you can’t find any, then wait. The cartel will break up – they always do. And then you’ll get the yield your hard-earned dollars deserve.