What jumps out at you when you look at this chart: 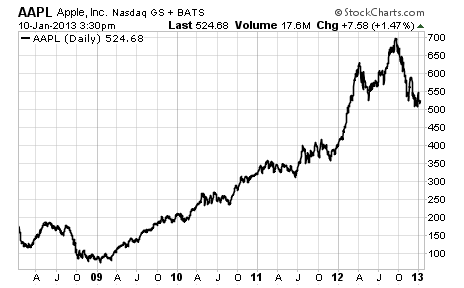 Surely the first thing you notice is that Apple (NASDAQ: AAPL) has been on quite a five-year run. But the next thing you might notice is how pronounced the world’s largest stock’s recent pullback has been.

Not since late 2008 – at the height of the recession – has an Apple slump been this sustained. Shares have fallen 25% since topping $700 in late September. Apple’s current funk is now approaching four months. The chart tells us that, since the start of 2009, no other Apple pullback has lasted more than about six weeks.

To be fair, the stock’s recent slump comes on the heels of its greatest run. Take one more look at that chart and notice what the stock did in the first three quarters of 2012. It basically doubled from where it was in late 2011. That kind of move isn’t sustainable – not even for the world’s largest company.

A pullback was inevitable, it seems. What has made this slump last longer than any other recent Apple slump, however, has everything to do with the company’s image.

The company’s two recent product launches – the iPhone 5 and the iPad Mini – failed to wow people the way previous versions had. Apple’s very public mea culpa about its failed “Maps App” on the iPhone 5 was a rare embarrassing moment for a company that had theretofore seemed incapable of screw-ups.

Perhaps most importantly, it’s been a while since Apple has truly introduced something new. It just keeps churning out iPhones, iPads and iPods – all of which are starting to lose their luster.

IPhone 5 sales have been slower than expected of late. According to research firm OTR Global, Apple will ship only 35-37 million iPhone 5 units this quarter – well shy of the 47 million units analysts were expecting.

While iPad Mini sales have been booming since their October release, the unveiling of Apple’s latest e-tablet failed to gain traction with investors the way past product releases had.

That may seem like picking nits – and it is. Somewhere, Tim Cook is throwing up his arms and screaming, “Are you not entertained?!” But this is the most profitable company in the history of the world we’re talking about. It should be held to a higher standard.

Rest assured: business is still good at Apple. Great, in fact. The company is coming off its best year ever, after all. Among the general public, Apple is still revered.

But on Wall Street, Apple seems to be developing an image problem. For now, it’s causing the largest stock on the market to be stuck in the mud.