Novavax (NASDAQ: NVAX) and Sinovac Biotech (NASDAQ: SVA) may be on the verge of a massive spike thanks to a harsher-than-expected flu season.

A fast and early flu season is gripping the U.S. However, this story is going largely underreported.

Though deaths and hospitalizations are below pandemic thresholds, doctor visits are up. The  Centers for Disease Control and Prevention reported that about 5.6% of all doctor visits are for cases of influenza. Only 2.2% of visits were for influenza last year.

Meanwhile, a CDC surveillance report showed that 42 states have widespread influenza outbreaks as of December 31. A widespread outbreak is nothing to sniffle at. The CDC defines widespread as “confirmed influenza in at least half the regions of the state with recent laboratory evidence of influenza in the state.”

The list of companies in the vaccination business is exhaustive, including Sanofi Aventis (NYSE: SNY), GlaxoSmithKline (NYSE: GSK), Novartis (NYSE: NVS) and AstraZeneca (NYSE: AZN). However, these companies are massive in size and sales growth resulting from an uptick in influenza cases will hardly move the needle.

Traders looking for a risky way to profit from higher influenza cases should turn to NVAX and SVA. These speculative ideas could be just what the doctor ordered.

NVAX broke above its long-term downtrend line (blue) last June, soaring 100% to $2.40 from $1.20. It’s been in consolidation mode during the past seven months and buyers have been reluctant to let the shares slip much below $1.80 (blue arrows).

Traders can enter around $2 and set a stop loss at $1.80. Initial resistance doesn’t occur until $2.40 and if the influenza story heats up, this stock could bolt to $3.60 – the next level of resistance – on nothing but pure speculative momentum.

This chart shows the price of NVAX shares along with an important support level to monitor.

SVA is a riskier play because it is a Chinese stock. However, the reward profile is similar to – and perhaps greater than – that of NVAX.

SVA already formed and broke out of two consolidation patterns (blue circles). So its uptrend is more mature compared to NVAX.

In fact, SVA needs only to overcome $3.50 resistance (blue) before another large rally begins. This rally could shoot the stock up to $4.50 or higher. Stop losses for this trade must be more liberal since support doesn’t exist until around $2.80.

NVAX and SVA are as speculative as trades go. In fact, neither is a viable investment. However, if the influenza story takes off, these stocks will likely do the same. 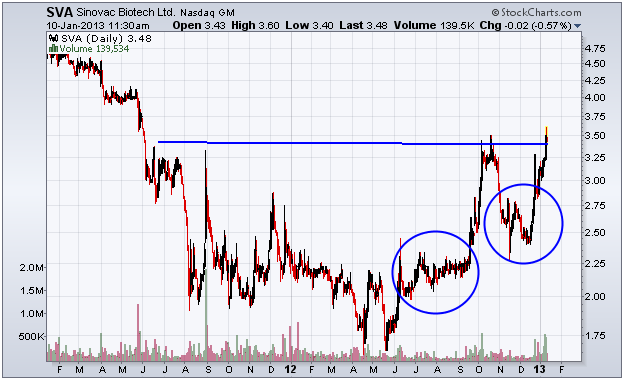 This chart shows the price of SVA shares along with an important resistance level to monitor.