Shares of the world’s largest company are down another 6% today, briefly dipping below $400 before recovering some its losses. Apple hasn’t closed a trading session below $400 since December 2011.

Now it’s in danger of doing it again.

Apple’s latest decline continues a pattern of falling lower every time Wall Street’s talking heads insist it has hit a bottom. The stock mounted small rallies in January, February and March – only to fall further still each time. 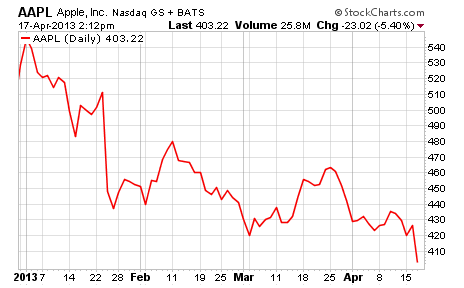 But Apple’s decline extends back further than the beginning of the year. Right now it’s approaching seven months.

Here’s a timeline of Apple’s performance since late September:

Where will Apple’s freefall end? Have we finally hit bottom?

With the stock trading at just 8 times forward earnings and analysts still setting a mean price target of $600 a share, it’s reasonable to think now is the time to buy Apple. But the PE has been low for months, and Wall Street has been repeatedly wrong about this stock of late.

It would be a mistake to assume that Apple’s decline is finally over.