You’ve read the same headlines that I have:

“Wheels Are Falling Off the Supercycle” – Wall Street Journal, April 25, 2013

… don’t quite resonate with investors as much as they used to, when stock prices reflected such biased statements.
This is especially true when well-publicized commodities like gold, silver and copper are weak and unable to stage convincing rallies.
The following four charts illustrate the point better than words alone can. These charts use the 200-day (red line) and 50-day (blue line) moving averages to show price trends.
Typically when a price is below either (or both) of these moving averages, the investment is said to be in “bear mode.” And when it is above the moving average it is said to be in “bull mode.”
From 2009 to 2011 many resources were in bull mode, taking only short breaks as they climbed higher and higher. Then, beginning at various times in 2011, trends began to break down. Price trends have been murky ever since.
First up is gold. At the beginning of 2012, and then again in February 2013, gold fell into bear mode. 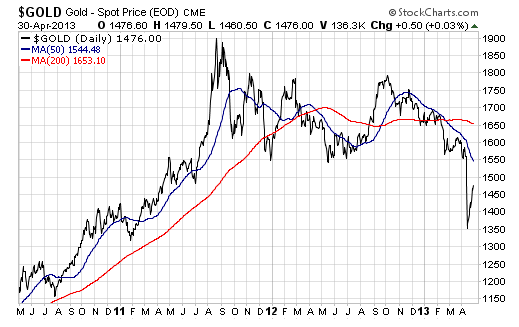 Silver, like gold, has spent much of the last two years in bear mode. 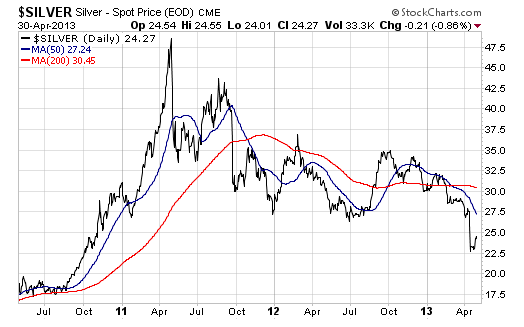 And the Toronto Venture Exchange, where many junior resource stocks trade, has basically been in hibernation since the beginning of 2012. This chart is just ugly. 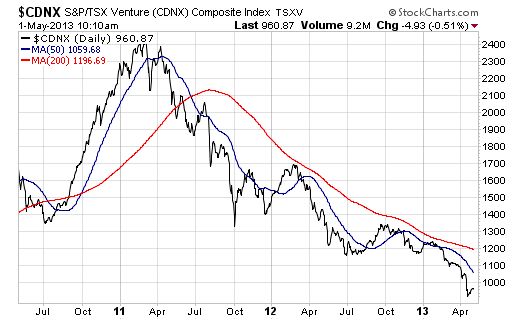 Perhaps one bright spot has been crude oil. Crude has moved between bull and bear mode several times over the past three years, usually holding up well in the beginning of the year and weakening throughout the summer months.
What also sets this chart apart from those above is that crude oil remains in a relatively small trading range between $80 and $110 per barrel. This means that companies in the industry have enjoyed relative price stability, something that mining CEOs only dream of these days.

The rub of all this is that general, broad-based resource investing hasn’t been the best strategy to outperform the broad market. That will likely change at some point, but the fact is that over the past couple of years, many resource stocks have vastly underperformed. Oil-related stocks are one exception.
So what are investors to do if they want to invest in that gold, silver or oil stock?
In this market resource investors have to identify the specific catalysts that will lead that stock to outperform. This might be a new project, partnership, merger … really it can be anything. The key is that there is a direct link between the event(s) and potential share price appreciation.
It requires a bit of work, but when broad trends get murky the majority of an industry’s stocks won’t trend higher like they often do in a bull market.
Remember that the market – especially a bear market – doesn’t reward investors for being right in general; it rewards them for being right on very specific ideas. So if you don’t have very specific reasons to buy that stock, stay away.
Good Investing,
Tyler Laundon, MBA