NVIDIA (NASDAQ: NVDA) is too cheap.

Analysts expect the company to report EPS of $0.86 this year, giving the stock a P/E ratio of 14. The company may not be the growth juggernaut that it was in the past. However, it’s transitioning into growing segments and gaining market share, too.

NVDA has been dragged lower during the past two years because PC sales have flatlined. Many analysts believe that the PC era is over. NVIDIA is a major supplier of the graphics chips inside PCs. So a decline in PC demand hurts NVIDIA’s business.

However, Wall Street seems to have forgotten that the company branched out beyond PCs. Their graphics cards, specifically Tegra and Icera, are in mobile devices – including Google’s Nexus and Microsoft’s SurfaceRT. This segment of NVIDIA is expected to grow sales by 50% in 2013. Moreover, TI exited the tablet industry, paving the way for another company to supply graphics processors for the Amazon.com Kindle lineup.

In addition to the future growth opportunities from mobile and handhelds, NVIDIA has an amazing balance sheet. The company boasts more than $3.75 billion in cash and investments with almost zero debt ($20 million). This cash balance also enabled the company to initiate a 2.5% dividend this year. Furthermore, that cash balance equates to nearly $6 per share and takes the company’s enterprise value down to about $4 billion. 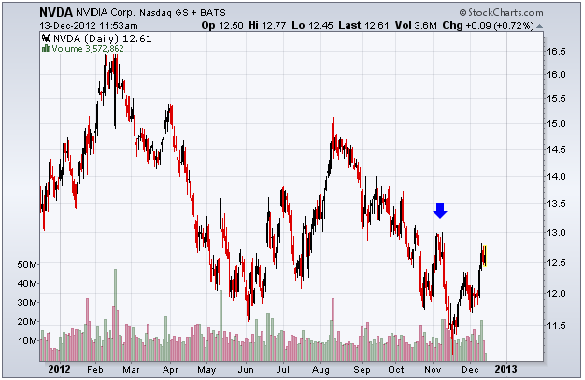 This chart shows the price of NVDA shares along with an important resistance level to monitor.

The shares are under some pressure in the near term. In fact, the recent selling is only part of a much larger decline. NVDA was a $25 stock in early 2011.

Though resistance exists around $13 (blue arrow), the sheer value of the stock should be enough to entice new buyers. It yields 2.5%, too. A breakout above $13 should result in a quick ride to $14.50. Over the long-term, NVDA is easily a $17 stock.

Equities mentioned in this article: NVDA